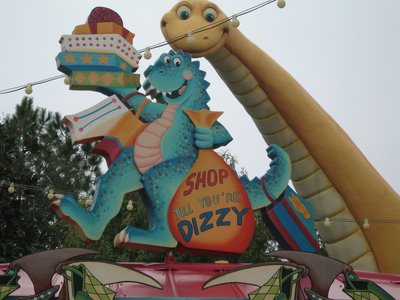 Lots of visitors come for the rides, others for the shows, even some for the food (and drink). But for lots of people the number one attraction in Orlando, a town more or less geared toward being a tourist magnet, is shopping. There’s plenty to be had at Disney World itself and a lot more ‘off-campus’ as well.

Shopping around Disney World parks can leave visitors feeling a bit of déjà vû. The little souvenirs hawked at the various booths are essentially the same ones from the Magic Kingdom to Epcot and the same goes for the prices. Shoppers are equally likely to find a souvenir featuring a favorite animal at Tomorrowland as they are at the Animal Kingdom. Often, the very same trinkets are sold at several different ‘lands’, the only customization coming in the form of a logo specific to the land in which it was purchased. Guests staying at a Disney resort hotel can have their purchases sent directly to their hotel’s concierge, as long as their stay lasts to the next day, the earliest point when they can be delivered.

Disney Springs is the number one shopping destination for Disney merchandise. Formerly split into three main areas, the third and middle section, Pleasure Island, began the process of completely shutting down in late 2008. There are still some shops that are open, notably the Harley-Davidson shop, selling Harley clothing. There’s also the Raglan Road Irish Pub and Restaurant, which despite its name is geared mostly toward selling Irish souvenirs and clothing. Curl by Sammy Duvall offers lots of wave-related swimwear and fashions, and also serves as the gateway to Mr. Duvall’s watersports centre, where visitors can get access to jetskis, parasailing, wakeboards and waterskis. Just a puff away is the high class cigar bar Fuego by Sosa Cigars. This classy joint has a bar made to look like a big slab of melting ice and an even bigger wooden humidor. There are plans however to revamp Pleasure Island into a new destination.

The two remaining major shopping areas are The West Side and the Marketplace.

The Disney Springs West Side is a large shopping area that opens at ten thirty daily. Its shops hawk items that might be best described as ‘impulse buys’;  kitschy, eye-catching trinkets that might be found in the checkout lines back at home. For starters, there’s Magnetron Magnets. This joint boasts over twenty thousand magnets which adorn its metallic walls. The magnets are not overpriced, and definitely include types not normally found. By contrast, Hoypaloi features interesting and original art from all over the united states, as well as Judaica, which we’re sure would have pleased Walt Disney. No t-shirts or commemorative bottle openers to be found here! Hoypaloi’s closely related store, Pop Gallery, is a sort of pop-flavored counterpart to Hoypaloi’s classy offerings (with similar price tags). Pop culture art including metal wall hangings and highly stylized photos can be had here.

On the lighter (and sweeter) side, there’s Disney’s Candy Cauldron, whose mainstay is freshly prepared confections like caramel apples and fresh spun cotton candy made to order. Too adventurous? The shelves hold many, many more kinds of packaged sugar bombs. Just up the road a piece is Magic Masters, offering magic trick kits for sale, demonstrated by staff magicians and set in a venue whose décor was modeled after the private library of Harry Houdini. One of the newer stores in the West Side is D-Street, the main outlet for Disney’s Vinylmation figurines. These small wonders come all in the shape of a squat Mickey Mouse but with various artistic appearances. Customers can choose from one of one hundred fifty-five off-the-rack designs, ranging from American flag to cupcake, or design their own using pens in the shop. There’s also another Sosa Cigars location, this one with the word Family in its title, in the West Side. Here, guests can enjoy the walk-in humidor or watch a staff member roll a fresh cigar by hand. Emerging into the street once more, if the sun is too bright, shoppers can head on over to Sunglass Icon to get some custom eyewear.

The Marketplace is the other large shopping area here. Visitors can enjoy a leisurely pace in the earliest part of the day, as shops open at various times (but all after nine thirty) and shoppers filter in slowly before the shopping area gets inundated later in the day. The offerings here are much more Disney-flavored than at the West Side, so those who come here come prepared for an experience heavy on the Mickey-Minnie factor.  You can reach the Marketplace by driving there or taking a Disney boat or bus.

Where the West Side has the Candy Cauldron, the Marketplace hosts Goofy’s Candy Co., featuring a show kitchen where guests can watch candy being made and then purchase it from the shelves all around.  For more candy and ice cream fun, Ghirardelli Soda Fountain and Chocolate Shop also sells a good mix of sweets but with a San Francisco bent. This Bay Area favorite makes this corner of the marketplace come alive with the smell of melting chocolate. Nearby Disney’s Design-A-Tee is a Disney twist on the traditional make-your-own-tee-shirt store popular at amusement parks; its sister store is Disney’s Wonderful World of Memories, from where come the custom mouse ear hats that people get their names and fave sports teams embroidered on.

For the ultimate in fun and minimum in utility, pin collectors flock to Disney’s Pin Traders. In the last decade, Disney pins have exploded in popularity, and are currently being produced to commemorate everything from the fourth of July to Snow White’s birthday.

The two top stores in the Disney Springs Marketplace, however, are the Lego Imagination Center and Disney’s Days of Christmas. The Lego shop serves a dual purpose: highly effective marketing of Legos and a bit of respite for parents, as kids thrill to the enormous crates of Legos that they can play with while their folks cool their heels. Disney’s Days of Christmas of course features about a million Disney-themed Christmas ornaments, but there’s also an area where guests can personalize their Christmasey creations. All in all, there is a host of options for those looking to spend money on mementos they can take home with them.