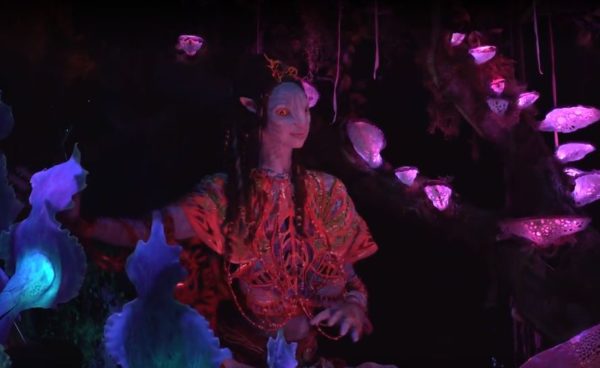 The Na’vi River Journey in Disney’s Animal Kingdom opened as part of the massive expansion known as Pandora – The World of Avatar. While this is not the big attraction of the area – that spot is held by Flight of Passage – it commands long lines and rightfully so.

Na’vi River Journey is a four and a half minute dark boat ride, which is pretty classic for Disney, but the rest is totally different. The boat sails through a Pandoran jungle at nighttime while bioluminescent plants glow all around. Exotic animals leap and play on semi-transparent projection screens so you can see everything going on in the foreground and the background. The whole experience feels very lifelike.

One of the coolest thing in all of the attraction though is the Shaman of Songs. This robotic Na’vi shaman can be found at the very end of the ride. She is one of the most technologically sophisticated audio-animatronics, for lack of a better word, that Disney has ever created. The original animatronics, like President Lincoln and the birds in the Enchanted Tiki Room, used pneumatic movements triggered by pre-recorded sounds. The Shaman uses state of the art technology like servos and electronics to create very fluid, lifelike movements.

Disney Imagineers they developed at least 20 new technologies that never existed before to make the Shaman do what they wanted and needed her to do. The Shaman of Songs combines art and technology to create a brand new aesthetic. Even from just a few feet away, she has impressive detail.

The story goes that the Shaman has a deep connection to the life force of Pandora and celebrates this connection and spreads positive energy through her music. Here are the lyrics to her song first in Pandoran language, which was created by Dr. Paul Frommer, then translated into English.

Got that?  Yea, me neither.  Here is the English translation.

Admittedly, it seems a little strange for Disney to make such a huge bet on a story like Avatar considering that there’s only one movie out right now. It’s true that this movie was one of the most successful in history.  Another one is coming out in soon, plus plans for three more after that through the year 2025.  However, some people wonder if it will be enough to give Pandora the staying power that other stories have.