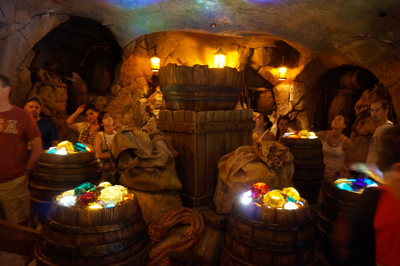 At long last, about three years after Disney announced the attraction, the Seven Dwarfs Mine Train is now open! It is the final piece of the huge New Fantasyland expansion in the Magic Kingdom.

Of course, the Disney animated classic Snow White and the Seven Dwarfs inspired the attraction. However, it is interesting that the attraction covers just the first part of the movie’s story,  specifically the mine where the Dwarfs work and the arrival of the Wicked Queen disguised as an old woman.

There is no bite from the poison apple and no kiss from Snow White’s first love. Perhaps those parts of the story will be covered in another attraction.  🙂

There is a lot to look at when it comes to this attraction, which represents the fourth mountain in the Magic Kingdom. The others are Splash Mountain, Space Mountain in Tomorrowland and Big Thunder Mountain Railroad in Frontierland.

Because there are so many details to review, I will cover the attraction queue in this article, and the actual attraction ride in another article.

As you approach the entrance to this attraction, you will first notice all the trees. There are dozens and dozens of them. This area really does look like a forest.

As you walk along the path from the entrance toward the mountain, you can see the footprints of forest animals in the path that leads through the Enchanted Forest around the attraction. I really like how Disney Imagineers take the time and effort to add little details like this.

There are plenty of other details to check out along the way, including wooden barrels and pitchforks that the industrious Dwarfs must use in their work.

Disney continues the trend to add more interactive elements to its queues. In addition to looking at the details in the surroundings you can also actively participate in some activities along the way.

In the first interactive station, you see a note from Doc that explains a game of sorting jewels. The jewels flow by, and you get to drag and sort them into trays on the side of the trough (also called a sluice, which means “water channel”). You can access the sluice from both side. It is about 15 feet long.

In the second interactive station, you see 12 spigots of streaming water. Each one represents a note, and as you move from stream to stream you can create a tune from the movie.

In the third interactive station, you enter a room with barrels of gems.  As you spin the gems, images of the dwarfs appear in the ceiling.

After enjoying the forest and the interactive elements, you get to the load area.  Just like the rest of this attraction, the design and detail continues everywhere.

So far, I’ve been really impressed with all the attention to detail that leads up to this amazing new attraction. In the next article, we will look at the details of the Mine Train attraction itself.

Do you like the Seven Dwarfs Mine Train queue?