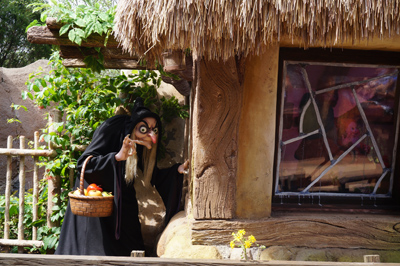 Last time, we took a look at the interesting details in the queue and around the outside of the Seven Dwarfs Mine Train Ride.

Now, we will take a look at the attraction itself.

Here is the requisite spoiler alert: If you don’t want to know all the details of the attraction, turn back now. Consider yourself properly warned.

The loading area for the attraction is a bit dark. Some of the queue here is covered. This is where you get into your mine train. Each train has five mine cars, and each car seats four people in a two-by-two configuration. The seats aren’t huge and might be a bit tight for two full grown adults. Each person has an individual lap bar.

The ride vehicles themselves are designed to swing back and forth. Personally, I didn’t notice very much of this motion. I actually thought this feature might make the ride less thrilling since you swing into the motion instead of getting pulled by gravity. In any event, this didn’t seem to have a noticeable impact on my ride.

After you exit the loading area, your car heads outside and makes a few turns. Soon you see two vultures near the entrance to the mine. These vultures were designed after vultures from the movie. They actually came from Snow White’s Scary Adventure attraction, which closed to make way for Princess Fairytale Hall.

Welcome To The Mine

Soon you enter the mine, which, for me, is the highlight of the ride.

Everywhere you look, you will see beautiful glowing jewels. The jewels come in four sizes and six colors: amber, red, purple, blue, green, and clear. The area has the look and feel of a traditional Disney dark ride, complete with black lights. It is truly like entering a different world.

Disney has created some truly beautiful animatronics. They are surprisingly large and surprisingly close to the track. Not only are the bodies animated but the faces are as well. If you’ve seen the Buzz Lightyear animatronic in the queue to the Buzz attraction in Tomorrowland, you get the idea. Somehow Disney projects an animation of the moving face inside the head. While the effect in the Mine Train seems similar to the technique used at Buzz Lightyear, here it somehow comes across in a new, amazing, and lifelike way. You really have to see it to believe it; it’s that good.

zzzzzzzIn addition to Dwarfs, the mine is home to quite a few animated animals too.

In the mine, you will see a wooden clock near where Doc works. It is a replica of the clock in the movie. When it goes off, the Dwarfs know it is time to sing “Heigh-Ho” and they do that in the ride just as they did in the movie.

When you exit the mine area you head into the big drop. It’s big, it makes your stomach yell “wheee,” and it’s fun.

After the drop, you go through a few more twists and turns.

There is a scene near the end of the ride that takes place in the Dwarf’s cottage. The figures of Happy, Bashful, Grumpy, Sleepy, and Doc in the cottage actually came from the now-closed Snow White’s Scary Adventure attraction. The figures in this scene of Sneezy, Dopey, and Snow White are new.

You can also see the Wicked Queen in disguise as an old woman looking inside the cottage through a window and watching Snow White and the Dwarfs.

Here is an interesting bit of trivia: In the original story about Snow White by the Brothers Grimm, the Dwarfs didn’t have names. When Disney animators decided to give them names, they rejected quite a few before settling on the current list. The names they rejected included Burpy, Shorty, Dizzy, Baldy, Tubby, Wheezy, and Sniffy.

Overall, I think that Disney has hit a home run with this attraction. It includes a fun, smooth, family-friendly coaster (similar in thrill level to Big Thunder Mountain), and newly styled animatronics that are just amazing.

Beyond all that, this attraction delivers on what Disney does so well; it tells the story of the Dwarfs, putting you into the middle of their world.

Do you like the Seven Dwarfs Mine Train attraction?