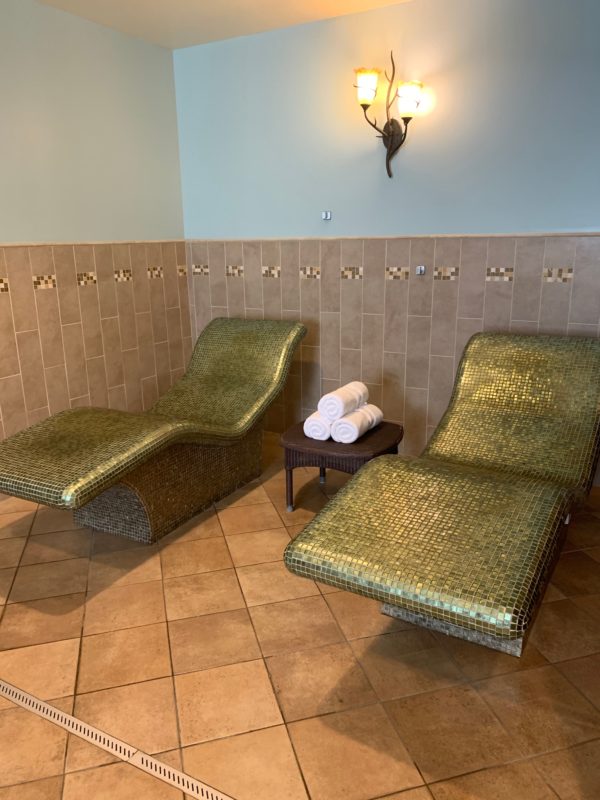 While visiting Disney’s Saratoga Springs Resort and Spa last week, I pampered myself with a visit to Senses – A Disney Spa. Senses can be found at Saratoga and also Disney’s Grand Floridian Resort and Spa, and it is a special experience that offers the Disney service without feeling excessively Disney.

Let’s take a look around Senses and see what they offer! (Note: because of the sensitive nature of the Spa areas, I wasn’t allowed to take photos in private areas.)

Senses Spa is absolutely beautiful. I’m not sure what I expected, but Senses surpassed all my expectations. The building was beautiful, and as soon as I walked through the doors, I noticed a very “spa” scent.

We were greeted by friendly Cast Members at the front desk, and since my mom was on an ECV scooter, we were taken down the elevator and backstage to the locker room.

We were shown around the locker room and given plush robes to change into for our massage. The Cast Member took us upstairs to the private lounge where we enjoyed spa water, and fruit and nut snacks before our massages.

Our masseuses greeted us in the private lounge and took us to the treatment rooms where they explained the massage and offered some extras including a hot oil treatment for our hair, a hand and foot massage, and hot stones. I selected hot stones, which was an upcharge of $25 but so worth it!

The treatment room was relaxing and very spa-like. Again, I’m not sure what I expected, but Senses looks like something you only see on tv!

I’ve been getting massages for nearly 20 years, and this was one of the best massages I’ve ever had. The masseuse was obviously knowledgeable, and I felt like I was getting Disney-quality service! For example, you know that awkward moment during a massage when you’re face up and not sure what to do with your eyes? They put a warm towel over my face! It was very calming and removed that awkwardness. Also, when I was face down, the massage table had a special connection where they slid in essential oil. I was offered tangerine and lavender, but I chose lavender. I was surprised that I could smell the oil throughout the massage! She also wrapped a warm towel around my feet at the end of the massage.

After our massages and upon opening the door, we were greeted with fresh spa water and a Ghirardelli chocolate square. They walked us back to the lounge where we were encouraged to relax as long as we wanted to. This is different from other similar spas I’ve been to where I’ve been rushed out after my treatment. Since I am a Disney Vacation Club member, we were offered complimentary beverages, but these beverages are available for purchase if you aren’t a DVC member.

After relaxing for a bit, we returned to the locker room, which is so much more than just a locker room!

We enjoyed the jacuzzi, and when we were done, I found iced towels, which I wrapped around my neck. This was a really nice final “treatment”. Disney thought of everything! It’s not just the iced towels, but they also offer toothbrushes and toothpaste, hair scrunchies, lotion, a makeup station with some essentials like q-tips and makeup sponges, a hair station with flat and curling irons, hairdryers, and products, and of course restroom and shower stalls.

Since we were already in our swimsuits, we decided to pack up our clothes (our Cast Member hostess provided us a bag) and head to the High Rock Springs feature pool, which is right outside the spa.

We really enjoyed our experience at Senses Spa, and I even got a significant discount as a DVC member. It was still pricey, but you’re paying for the extra “Disney”. I would highly recommend Senses! It was a great experience during our mother-daughter vacation, but I also saw several couples and some enjoying the experience all alone.

Do you deserve some pampering at Senses Spa?