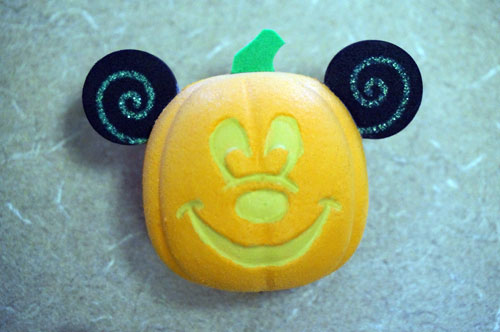 Is it just me, or do the start of holiday seasons seem to come earlier and earlier each year?

At this point I think that the Christmas season can’t be extended much more because it starts immediately after Halloween ends. The merchandising season for Christmas is probably now maxed out at just under two months (end of October to end of December).

However, it seems that Halloween doesn’t have something to limit it from starting earlier and earlier (except maybe Easter, but let’s hope it doesn’t come to that).

At Walt Disney World, you can see Halloween merchandise in mid-August, meaning that it will be on display for two and a half months. Wow!

Let’s take a look at some of the Halloween merchandise that Disney has on display for 2014 in the Emporium on Main Street USA in the Magic Kingdom. Be sure to check out the details at the end of this article for how you can enter to win some fun Disney Halloween stuff.

Would you like to win a Disney Halloween Prize Pack?  The prize pack includes a Mickey Ghost Glow Lanyard, Mickey pumpkin antenna topper (also a nice decoration on its own), Halloween Mickey Mouse Disney Trading Pin, and a Mickey Pumpkin Glow Flashlight.

This sweepstakes ends August 29, 2014, so be sure to enter, share your entry with your friends, and encourage them to enter too. It will be a fun way to increase your chances of winning, and give your friends a chance to win too.

Would you like to win a Disney Halloween prize pack?