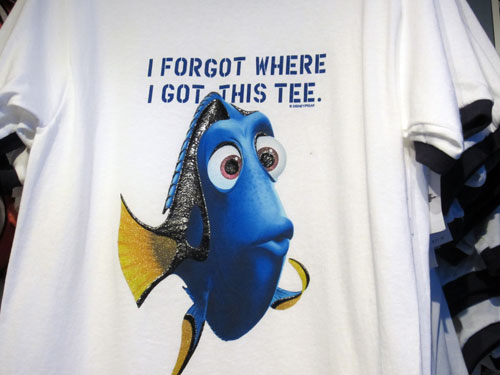 Five Places to See Dory and Friends at Disney World

When Finding Nemo was released in 2003, it was the fifth Pixar animated film and followed other successes like Toy Story, A Bug’s Life, and Monsters, Inc. The story of a clownfish who loses his son in the Great Barrier Reef pulled on the heartstrings of moviegoers and raked in more than $380 million.

Thirteen years later, Pixar decided to create a movie with Finding Nemo’s beloved character Dory as the star. This time, she is trying to find her parents from whom she was separated many years ago. She doesn’t know how or why they were separated, but she’s on a mission to find out. Once again, Pixar creates a heartwarming tale of family and friendship.

Of course, Disney is going to capitalize on Finding Dory’s popularity!

There are several places in the parks to see and experience Dory and her friends. Let’s take a look at five places!

Crush, a very old turtle, plays an important role in both Finding Nemo and Finding Dory. In Nemo, Crush and his son, Squirt, help Marlin and Dory find their way to Sydney, where they think Nemo was taken. He plays a similar role in Finding Dory.

In Turtle Talk with Crush in Epcot‘s The Seas pavilion, you can see all of your Finding Nemo friends plus many characters from Finding Dory have now been added! Meet Destiny, a whale shark, Bailey, a beluga whale, and Hank, a “septopus” (an octopus with only seven arms). Squirt and Marlin also make their first appearances!

In the Seas pavilion in Epcot, there are giant aquariums full of all different kinds of fish. If you look closely, you can spot some blue tang fish. Dory is fun to observe in her natural habitat.

Everyone loves a good snack, and Disney World is known for their sweet treats! What better way to treat yourself than to your favorite character in apple form?! At Big Top Souvenirs in Magic Kingdom‘s Fantasyland and Disney’s Candy Cauldron in Disney Springs, you can get Nemo and Dory apples.

In Disney’s Animal Kingdom, Finding Nemo the Musical remains a popular stage show. The 40-minute show features original songs with vibrant puppets and sets. The underwater effects are created with special lighting, and all of your friends are there to tell the story of Finding Nemo.

We don’t know yet whether a Finding Dory show will replace or possibly alternate or combine with the existing show, but you can bet that eagle-eyed fans will be looking for Dory in the show!

If you want a plush Dory to take home with you, the place to find it is in Disney World! Many of the shops including the Emporium, World of Disney, and The Seas will have not only plush but several other Finding Dory souvenirs.

A quick search of The Disney Store showed me everything from Dory pajamas to a Hank mug. Whatever you’re looking for, you can find it at the recently enlarged World of Disney store in Disney Springs.

Do you enjoy seeing Dory at Disney World?