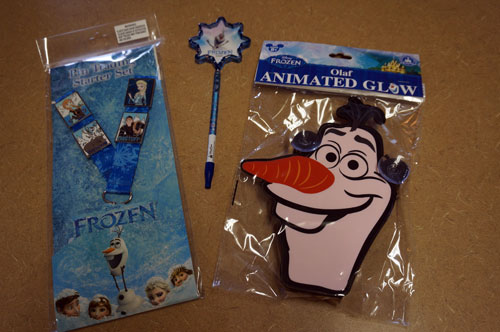 As part of the “Frozen” Fun events at Disney’s Hollywood Studios, there are two events taking place in Sound Stage One which is located between the ABC Commissary and the Studio Backlot Tour:

– Wandering Oaken’s Trading Post: A shopping area that has a series of displays where you can view and pick out Frozen merchandise.

– The Frozen Funland: An area where you can ice skate and take photos against Frozen-themed backdrops.

Let’s take a look at these two different areas, each of which has a separate entrance and a separate queue to get in:

Before we get to the merchandise, let’s look at the next-door attraction: the Frozen Funland.

For me, this attraction was “hiding in plain sight.” For some reason, I had a hard time finding it, even though the entrance was directly next to entrance for Wandering Oaken’s Trading Post (which I had just visited).

It could be that the two separate queue lines for the Funland vs. the Trading Post seem to form one big area even though there are two separate lines.

Inside the Funland the main draw is ice skating. You can rent skates and shuffle around the large rink.  The cost is $10 for 30 minutes.

Also inside the Funland was a small snack shop, a photo spot with “Frozen” backdrops, and a pile of “real” snow (yes, it was cold and frozen hard). Plenty of kids were having a blast, doing their best to make a snowman. The snow seemed to be packed down, so building much of anything was a challenge. However, plenty of people had a great time getting their feet and hands cold.

The display areas where you can shop and pick out the merchandise are relatively small.  It is much smaller than the display area for Darth’s Mall during Star Wars Weekends, which contains a vast array of products build up over the years.  However, Disney seems to have covered the basics with some type of “Frozen” merchandise to please everyone.

The crowds seem to be continuous and Disney controls how many people get in based on the number of folks coming out.

Disney stationed plenty of Cast Members around the store to constantly restock the merchandise.

Would you like to win a “Frozen” gift pack including four “Frozen” Disney Trading Pins, a “Frozen” pen, and a light-up animated Olaf?

This sweepstakes ends July 18, 2014, so be sure to enter, share your entry with your friends, and encourage them to enter too. It will be a fun way to increase your chances of winning, and give your friends a chance to win too.

(Note:  We notify winners via e-mail.  Be sure to add World of Walt to your safe senders in your e-mail program so that you are sure to receive communications from us.)

The winner’s name has been posted on our winner page.

Would you like to win a “Frozen” Prize Pack that includes Disney trading pins?