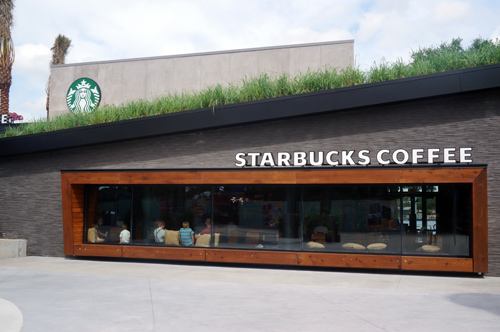 Starbucks opened its second location in Disney Springs on Friday, May 30, 2014. This follows the opening of the first Starbucks Disney Springs location, a walk-up, in the Marketplace section in front of the World of Disney store.

All these follow other Starbucks locations that have opened in the Magic Kingdom and Epcot and will be followed by locations planned but not yet open at Disney’s Hollywood Studios and Disney’s Animal Kingdom.

Big and a Bit Unique

In addition to the environmental features, there are some technical ones too. The store houses 70 inch TVs that connect this store in Orlando with the one in Disneyland.

The building is designed with a see-through style and provides views of the nearby lake from a patio.

There are lounge areas providing more than 100 seats, including a long table made of old wood reclaimed from a mid-1800s cotton mill in Alabama.

This Starbucks is designated a “Starbucks Reserve” location, which means it serves up limited edition coffee and coffee brewed in small batches.

This Starbucks is open from 10AM to midnight.

Do you like seeing this Starbucks in Disney Springs?