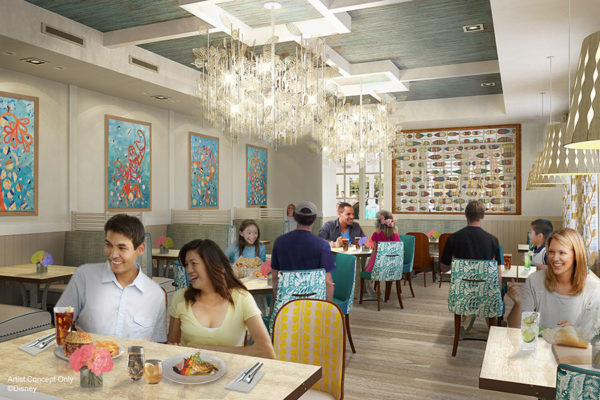 In recent years, Disney’s Caribbean Beach Resort has undergone major changes to upgrade a number of areas of the resort. In addition to an updated shop and main lobby, a new restaurant also opened: Sebastian’s Bistro.

Sebastian’s Bistro was typically met with great reviews, especially by Vloggers and Bloggers. The Bistro even secured a 4-star rating on review sites Yelp! and Tripadvisor.

Unfortunately, it appears Sebastian’s voyage Under the Sea may have ended – at least for a while.

In the 2 years that Sebastian’s was open, it was able to generate a group of die-hard fans who raved about their signature dishes including the Jerk Chicken, Key Lime Pie, and a number of their seafood dishes.

However, reports online showed that, although the reviews were good, Sebastian’s Bistro struggled to fill their seats, even pre-COVID. The restaurant switched from serving lunch and dinner to dinner only.

After the Caribbean Beach Resort re-opened in late July 2020, the resort was absent of their main sit-down dining location, Sebastian’s Bistro. Now, it appears that the Bistro may remain closed for the foreseeable future.

After seeing rumors swirling online that Sebastian’s would remain closed, we decided to dig a little deeper.

We made several attempts to secure a dining reservation, to which we were met with the message “Dining Plans Are Temporarily Unavailable” with no area to select a date or time.

We were able to utilize Walt Disney World’s interactive chat feature and ask a Cast Member what the status was of the restaurant. The Cast Member gave the following response:

“Currently, there has not been a reopening date established for Sebastian’s Bistro at Disney’s Caribbean Beach Resort.”

So, it appears the exact fate for Sebastian’s Bistro is a bit unknown. It is worth mentioning there is a slight glimmer of hope for Sebastian’s as Spyglass Grill, another dining location at Caribbean Beach, also features the same message (and lack of date/time area). We have yet to see similar reports detailing a possible closure of Spyglass Grill.

The COVID-19 pandemic has wreaked havoc on businesses across the world. Disney Parks and their restaurant/shops were not spared from the hard times. What this means is that as Disney Parks across the globe start to fully reopen, we may see certain places remained close or look different.

Were you a fan Sebastian’s Bistro?  Sad there is no reopening date?