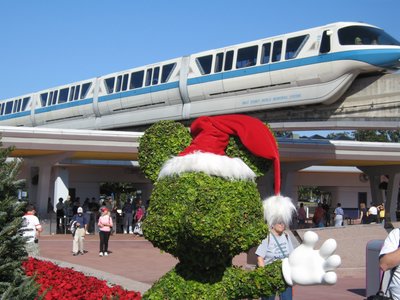 Walt Disney World marks The Seasons as only Disney knows how: with spectacular festivals, shows, and other events pulled off with unparalleled opulence and style. Disney World celebrates the major holidays with suitable vigor, but also hosts a number of non-holidays events throughout the year. Most months have something special to offer Disney World guests, whether they are braving the mighty crowds at New Year’s or enjoying the resort during the comparatively peaceful off-season.

The Seasons at the Magic Kingdom

The seasonal special events at Disney kick off at the Magic Kingdom with the Princess Half Marathon in February. The race was first run in 2009, and the 13.1 mile course takes runners through the Magic Kingdom and Epcot. The Magic Kingdom is the start and finish, and every woman who makes it to the end wins a princess tiara.

In September, the Magic Kingdom hosts the two-day Night of Joy Christian music festival, featuring performances by contemporary Christian artists in a series of outdoor concerts. The concerts feature musicians whose music covers a wide range of genres, including gospel, rock and pop music.

Halloween is a great time of year to visit the Magic Kingdom, and in order to spread the fun around Disney makes the Halloween season last from the end of September through November. Mickey’s Not-So-Scary Halloween party is a separate admission event, which is often referred to as a “hard ticket” event, meaning that you can’t get in with standard park admission but must purchase a special ticket. The party takes place on selected days throughout this time period, and it features trick-or-treating throughout the park, a Disney villains show, the Boo-To-You Halloween parade led by the Headless Horseman, and a Halloween-themed fireworks display.

Like the Halloween party, Mickey’s Very Merry Christmas Party is a separate-admission event featuring a holiday parade, holiday fireworks display, and other exclusive events. There are meet-and-greet character opportunities throughout the park, as well as complimentary cookies and hot cocoa, For many guests, the highlight of the Christmas party is the snowfall on Main Street USA – a magical experience indeed considering that the state of Florida regularly sees winter temperatures in the 70s or even 80s.

The Seasons at Epcot

The first of Epcot’s seasonal events comes in March with the International Flower and Garden Festival. The most famous feature of this event is the over 100 topiaries, including approximately 75 topiaries of famous Disney characters. Avid gardeners can also visit with some of the top garden designers in the country for advice and ideas. At the America Gardens Theatre, a different artist will perform music from the 60s and 70s each weekend as a part of the Flower Power Concert series.

The Sounds Like Summer concert series lasts from June until July, and showcases a series of tribute performers playing the songs of various music legends. These outdoor shows take place at Epcot’s America Gardens Theatre.

No adults visiting Disney World in October or early November should allow themselves to skip the Epcot Food and Wine Festival. International kiosks throughout the World Showcase allow guests to sample a variety of snacks and beverages. Cooking demonstrations and classes are available, some featuring celebrity chefs. Wine and beer tastings are prominent during the festival, while adventurous home cocktail creators can take a mixology class. The bold and athletic can combine the festival with the Wine and Dine Half Marathon weekend in November, to help balance out all the tasty calories they will be consuming.

On New Year’s Eve, all four theme parks are packed to the gills with people celebrating the final hours of December. However, Epcot deserves a special mention as the most exciting destination for adults and possibly a place to avoid if you have young children with you. Each of the World Showcase pavilions go all-out for New Year’s, and the celebration lasts throughout the day. Epcot has the largest number of location where beer, wine, and cocktails may be purchased, and as a result Epcot has developed into the top destination for adults looking to party. Not that things ever get too out of hand on Disney’s watch, but the Magic Kingdom is probably still a better choice for the kids.

The Seasons at Disney’s Hollywood Studios

For most of November through the beginning of January, the Osborne Family Spectacle of Dancing Lights can be seen at Disney’s Holly wood Studios. This performance showcases millions of tiny lights that blink on and off in dizzying synchronization to the sounds of holiday music, forming holiday images such as Santa and his reindeer.

Star Wars Weekends happen in May and June, and feature several events celebrating the six Star Wars films. Guests can have autographs signed by famous Star Wars characters, attend the Jedi Training Academy (for children 12 and under), and attend the Hyperspace Hoopla to see all the famous Star Wars icons dancing and performing.

The Seasons Everywhere Else (at Disney World)

Nothing kicks off a brand new year in a positive way like running the Walt Disney World Marathon. Unless you didn’t train for it, in which case nothing kicks off several months of soreness and pain like running the Walt Disney World Marathon. For those fit and brave enough to attempt it, the 26.2 mile race takes runners on a course through all four theme parks. A half-marathon and 5k are also run on the same weekend.

The Children’s Miracle Network Hospitals Classic PGA (Professional golfing Association) golf tournament takes place over four days every November on the Walt Disney Resort Golf courses. This tournament is the longest-running in Central Florida, and was first played in 1971.

Disney Springs hosts its own New Year’s Event celebration at DisneyQuest Indoor Interactive theme park, as well as the Festival of the Seasons from November through January featuring holiday décor and live entertainment. Disney Springs also hosts the Festival of the Masters open-air art festival every November, with hand-on activities for guests and live performances.

At the ESPN Wide World Of Sports Complex, visitors can watch the Atlanta Braves Major League Baseball team during their spring training, or attend the Old Spice Classic college basketball tournament in the fall.

Fun All Year Round

No matter what time of the year you decide to visit, you are sure to enjoy not just the everyday magic of Disney attractions and fun but also many special events to add to the enjoyment of your visit.