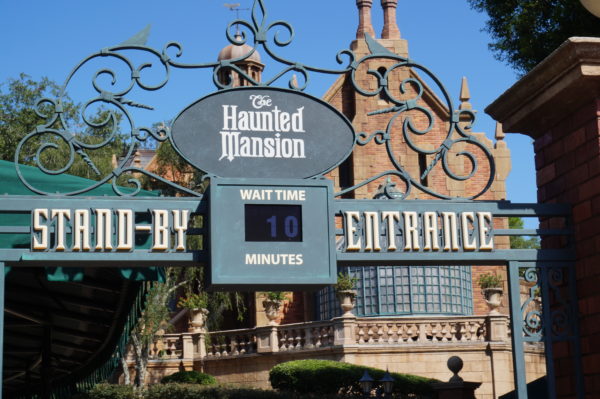 I’m in the process of planning our family vacation for later this year just before our son turns three. (I’m pushing his maturity as far as I can while still taking advantage of the free admission!) My little guy isn’t scared of much, but I’m aware that some attractions could be scary for him, which is a good start to helping him deal with these attractions once we actually arrive.

The first time I visited Disney World, I was in my 20s, and I was scared of rollercoasters because I had only ridden cheap, rickety ones. Disney’s rides are different. I spoke with a very patient Cast Member before boarding my first Disney rollercoaster who told me that Magic Kingdom was built for families. The rides are appropriate for everyone (providing that you fall in the height requirements), and they don’t break any records for speed or height, and there aren’t any dizzying inversions. I felt comforted and proceeded to the boarding area, but I’m not sure how to convey this to a toddler.

Just the name “Haunted Mansion” could be enough to deter some hesitant littles. Anything haunted implies scary, and many children are not about that life. The queue depicts a graveyard with some intimidating headstones and even a very large interactive organ. Even Cast Members are dressed in creepy costumes. Then, the first thing you experience is the stretching room, which is really just an illusion but a very good one that might really freak out some kids who can’t understand how it works. Heck, even some adults are freaked out in the stretching room. The ride itself isn’t too scary except the fact that you’re boarding “doom buggies.”

In fact, the Haunted Mansion in Liberty Square is home to 99 happy haunts… but they’re always open to welcoming one more! For an attraction that is rated for “any height”, there are some pretty scary aspects of this ride.

2. Pirates of the Caribbean

Pirates Of The Caribbean in Adventureland is also rated for all ages, but this classic Disney attraction is set in the dark where you will see the skeletons of fallen pirates and where pirates are held captive in primitive jail cells. While the pirates are caricatures and audio-animatronics, they can look very real to kids. There are also surprise special effects like the canon battle at the midpoint of the ride. Yo ho! It might not be the pirates life for your kid.

Seven Dwarfs Mine Train is part of New Fantasyland. It’s been open for several years now, but it remains one of the most popular FastPass+ attractions in all of Disney World. As with Splash Mountain, it’s not the story that’s scary. Some kids don’t even have a problem with the actual rollercoaster, which goes 34 miles per hour at top speed. With a 38 inch height minimum, many young children are able to ride this attraction.

It’s worth also noting that the animatronic witch who scared the bajeebees out of many young children in the Snow Whites Scary Adventures attraction that was torn down to make way for New Fantasyland also appears at the end of the Mine Train as you’re returning to the loading dock. She is equally scary here as she was in her former location.

Space Mountain in Magic Kingdom’s Tomorrowland is an indoor rollercoaster with a 44 inch height requirement. This means that many older children are able to ride. Space Mountain takes guests on a ride through space in total darkness with just some stars to light your way. Space Mountain reaches a top speed of 28 miles per hour, just a bit faster than Disney’s slowest thrill ride, Barnstormer, at 25 miles per hour. Barnstormer is meant for younger children, so Space Mountain should be fine. The problem is that the darkness and sudden drops give the illusion of going much faster. In fact, some adults won’t ride Space Mountain! It could definitely be too much for some easily frightened little kids.

I think what makes Splash Mountain scary is that the beginning isn’t scary at all. This water ride in Frontierland tells the story of Br’er Rabbit, Br’er Bear, and Br’er Fox. Br’er Rabbit is searching for his laughing place, and Br’er Bear and Br’er Fox are searching for Br’er Rabbit! While the undertones of hunting might not sit well with little kids (if they even pick up on that part of the story), the catchy tunes and colorful scenes are pretty benign. There are a couple small drops throughout the first part of the ride, but what really scares kids is the big drop at the end. It’s a five-story drop, and it’s very likely that you’ll get wet to some degree. If you’re sitting in the front, you’ll get soaked- I speak from experience.

Riders do have to be at least 40 inches to ride this attraction, but that still opens it up to many young children and even some very tall toddlers. Some kids don’t like the huge drop; others don’t like to get wet. Many would like to avoid both circumstances!

So what’s a parent to do? You don’t have to totally avoid these rides, and you don’t have to trick your kids to get on and hope they don’t freak out. I’ve started talking to my son about what we might see in Disney World, and I’ve shown him point of view videos on YouTube so he has an idea of what to expect before we get there. This is probably the best way to prepare little ones for attractions in Disney World.

Has your child been frightened by an attraction in Disney World?