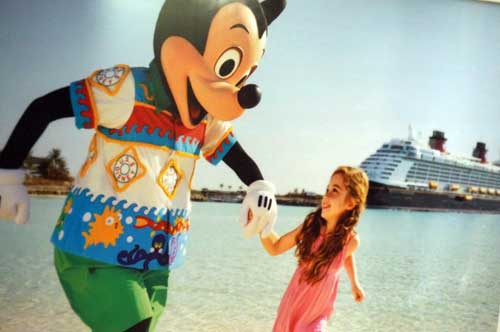 Top Ten Tips for Saving Money on a Disney Cruise

A Disney Cruise Line vacation seems like just a dream for many Disney fans. People often write off a Disney Cruise thinking that it’s too expensive.

Fortunately, if Disney has taught us anything, it is that dreams really do come true!

If you’d like to take a Disney Cruise, but you want to save as much money as possible, keep reading!

Let’s take a look at the top ten tips for saving money on a Disney Cruise.

It used to be that cruise lines would offer last minute deals that would save you a ton of money, but this doesn’t happen as much anymore. Instead, they want you to book early and may actually reward you for doing so (see #10 below).

Booking early will get you the best selection of staterooms at a variety of price points. Since Disney Cruise Line hardly ever offers sales, you can be fairly sure that prices will only go up as the cruise gets closer. Plus, the DCL is like a supply and demand engine! As the ship fills up, the prices go up. Although it’s rare, it sometimes happens that a less expensive fare comes up after you’ve booked. In this case, Disney will almost always adjust your price accordingly.

Another benefit of booking early is that you get first seating at dinner, which can be important for families with young children who need to get to bed early.

The Disney Shore Excursions are really great. They’re very high quality and very personal, but they are also very expensive.

While Disney does make some good arguments for booking excursions through them like guaranteeing that you’ll be back on the ship in time for departure, most other third parties do this too.

In many cases, you can save up to half by booking your shore excursions with a third party.

It’s important to stay in touch with friends and family while you’re at sea, and Disney has some ways to make this happen without racking up a huge bill with your cellular carrier.

First, the DCL has a signature service called the Wave Phone. With these phones, you can call and text on the ship and on Disney’s Castaway Cay. This is a completely unique aspect of the Disney Cruise Ships. Each stateroom is given two Wave Phones, but more are available for a fee.

Second, you’ll have wireless Internet access, but it may be slower than what you’re used to. There are also cafes with Wi-Fi. While some ships charge per minute or per day, Disney charges according to the amount of data you use.

Finally, you can use your own cell phone, but you’ll pay your carrier’s rates for international calling and roaming. Ouch!  You can reduce these charges by turning your phone off or placing it in airplane mode.

If you want to stay in touch and save money, the best way to do so is to use the two Wave Phones provided. Stay off of your regular cell phone and avoid accessing the Internet.  That’s a great way to really relax and unplug from the real world anyway!

4. Travel while the kids are in school

Generally speaking, mid-January and February, early May, and September through November (aka hurricane season) are the best times to travel if you want the best deal. You can even book two months out and still get a good rate. However, if you want the best deal, it’s a good idea to plan about six months in advance, which is still pretty reasonable for most families.

There are two ways to choose the best budget-friendly cruise ship destination.

First, think about sailing out of a port close to home. This will cut down on driving/flying time and costs, and perhaps prevent you from having to book a hotel for the night before your cruise. With ports in New York, Florida, California, and Texas, you have a lot of choices on where to sail from.

Second, you can choose destinations that tend to be less expensive. Caribbean and Mexican cruises are usually the most budget friendly.

6. Book with a travel agent

It’s often better to book cruises with a travel agent.

These things are not included in our cruise price, so getting them for free can really add to the value of your vacation. While you may not get all or even any of these things with a travel agent, you’re a lot more likely to get them with an agent than booking on your own through a travel site or through Disney Cruise Line.

Plus, you’ll have a professional at hand anytime you have questions or problems. Remember in number one where I talked about a fare going down? Travel agents know how to get your cost adjusted. They do it all the time.

I know. I like shiny, new things as well, but if it’s going to save me money, I might be willing to negotiate.

Sister ships the Disney Wonder and the Disney Magic were recently remodeled in 2016 and 2013 respectively. While the Wonder is new and fantastic and, well, wonderful, the Magic offers similar amenities. What’s more, the Disney Dream and the Disney Fantasy, also sister ships, set sail in 2011 and 2012 respectively. These older ships will offer better pricing than the Wonder because everyone wants to see the new ship making it more in demand.

Once Disney launches its three new ships, yet to be named, in 2021, 2022, and 2023, the current ships will likely see lower prices than the new ships.

Cruising on an older ship will bring just as much magic but possibly at a lower cost. Since everything Disney is great, it might be worth the savings.

8. Opt for a Secret Porthole room

The Secret Porthole rooms aboard the Disney Cruise Lines are inside rooms with magic portholes that give you a view to the outside world. Disney has used its magic to create a screen that displays what’s going on outside in real time.

Since these rooms are not actually outside rooms, which are much more expensive, they don’t have amenities like a balcony, but they are more affordable and give some semblance of being on the outside.  Plus, how much time will you really spend in your room anyway?

While it’s convenient to book your Disney Cruise and your visit to Walt Disney World together, it is almost always more expensive. Booking together means you only have to check in once. When Disney World still used Key to the World  cards, they would work on your hotel room, in the parks, and on the DCL when you book together but they don’t use these anymore and MagicBands aren’t used on the DCL yet, so that isn’t a reason to book together.

While booking separately may be just a bit more of a hassle, that little bit of extra time and effort can save you hundreds of dollars.

When booking together, you cannot use any discounted rates, which means you’ll be paying full price for your room. You also don’t have any room options other than standard. If you’re traveling with a family and you’d like to stay in a family suite at Disney’s Art of Animation Resort, you can’t book it with your cruise. You also don’t have many ticket options. You can only book a one- to five-day Park Hopper, and you can’t add the water parks and more option or a dining plan.

Like I said, booking separately may be more time-consuming, but you can better customize your vacation options and save money doing it.  This is another point where a travel agent can help you with the booking and saving money.

10. Book low and hope for an upgrade

When you book early, you will have the best opportunity to get the most affordable rooms. Since many people want the least expensive rooms (which happen to be 10 and 11 A, B, and C), these will book first.

As the cruise approaches, Disney occasionally upgrades those early bookings free of charge to open up the most affordable rooms and pack the ship. This is the best way to get the most out of your Disney Cruise, but you can’t count on this.

A room upgrade option that gives you more control involves asking for and paying for an upgrade. When you arrive at port, head straight for the check-in desk and let them know that you’re interested in paying for an upgraded stateroom. If the ship isn’t full, they can almost always accommodate your request, and you’ll pay much less than if you had booked that room at the outset. The only way for this to be really effective is to arrive at port early. Many people know of this option, so lots of other cruisers will be trying it, too.

Any tips for saving money on a Disney Cruise Line vacation?