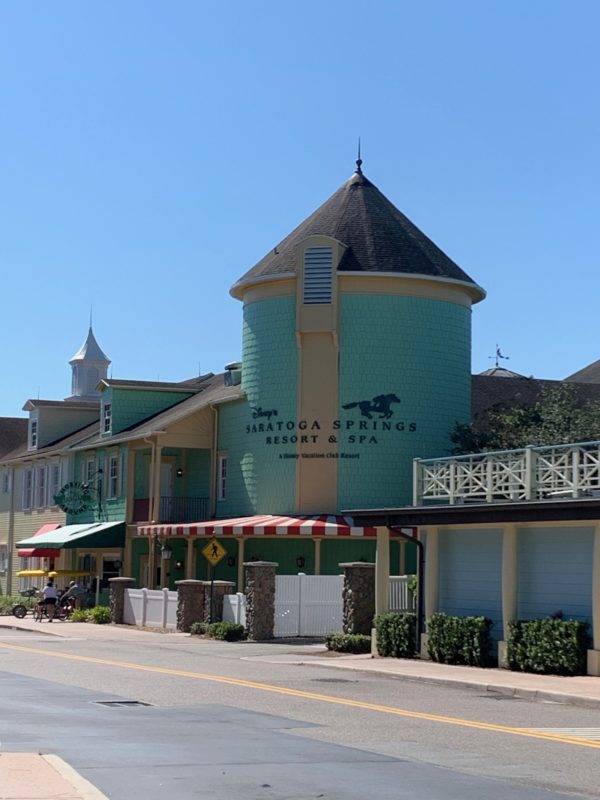 Disney’s Saratoga Springs Resort and Spa, a Deluxe Resort Hotel and also a Disney Vacation Club Resort, opened on May 17th, 2004 on the site of the former Disney Institute. With 65 acres, 18 villa buildings, 828 Vacation Home units, and 60 treehouse villas, this is Disney Vacation Club’s largest resort.

I stayed in a two-bedroom villa at Saratoga Springs while I was in Disney World for the open house event for Disney’s Riviera Resort. While I reserved a deluxe studio, I was pixie-dusted with a magical upgrade! I had a ton of fun, so I thought I’d share my experience with you!

Disney’s Saratoga Springs Resort and Spa (often referred to as SSR), is inspired by Saratoga Springs in New York, which has a strong history of horse racing and is named for the mineral springs that have made the resort town a popular destination for more than 200 years.

The buildings are pastel-colored, and the grounds are beautifully manicured.

The High Rock Springs Pool, the original feature pool, has a natural spring theme with rocks, geysers, and a water slide. The Paddock Pool, a feature pool that opened in 2011 as part of a second phase, has a water-tower slide and similar theming. Both pools have a zero-depth entry and hot tubs.

Disney’s Saratoga Springs Resort offers one-, two-, and three-bedroom grand villas plus treehouse villas and single-room deluxe studios. The villas have a full kitchen and laundry while the studios feature kitchenettes with a small refrigerator and microwave, one bathroom, one queen bed and one queen-size sleeper sofa, and a large porch for ground-level rooms or balcony for upper-level rooms.

Saratoga Springs is consistently one of the lowest-cost Deluxe Villa Resorts on property for both Disney Vacation Club Points and cash payments.

My mom joined me on this trip, and our upgrade to the two-bedroom villa meant that we each had our own room plus a common area to share.

I took the master bedroom, which had one king-sized bed, a desk, a television, and separate bathroom areas for convenient getting-ready places. The first area had a sink, jacuzzi tub, and a large closet. The soaking tub The second area had a very large shower with a smaller sink, and the third room was just a toilet.

My mom claimed the other bedroom, which had two queen beds, a desk a double sink, and a bathroom with a toilet, tub, and shower. There was also a very large closet and a television.

The common area offered a full kitchen with a range, fridge and freezer, stocked cabinets, and a coffee pot. On the other side of the kitchen counter was a standard height breakfast bar with two chairs, and right next to the kitchen was a dining room table with bench seating for two adults. If this isn’t enough, you can easily pull the two chairs over to the table. The living room features a full pull-out sofa bed and a television. You can also access the patio from here. Finally, just off of the master bedroom before entering the dining area, there is an apartment-style washer and dryer.

Disney provides the laundry detergent, dish soap, and linens for the kitchen and laundry areas.

The Turf Club Bar and Grill is a full-service, casual dining, table-service restaurant serving up American cuisine in a racetrack clubhouse setting with breathtaking views of the golf course or lake. It is only open for dinner, and the menu features plenty of surf & turf entrees, appetizers, and delicious desserts.

Artist’s Palette is a counter-service dining location serving breakfast, lunch, and dinner. Breakfast includes entrees, omelets, breakfast wraps and sandwiches, sides, Kids’ Disney Check Meals, Kids’ Meals, desserts, bakery items, and snacks. For lunch and dinner, the menu includes entrees, pizza, sandwiches, salads, sides, Kids’ Meals and Kids’ Check Meals, desserts, bakery items, and snacks. Alcoholic and non-alcoholic beverages are available all day. There are also grocery items available inside this counter-service restaurant, so you can easily pick up what you need, take it back to your villa and prepare it in the comfort of your favorite Disney jammies! Artist’s Palette has a fun artist’s studio theme.

There are also three pool-side counter-service dining locations including Backstretch Pool Bar, The Paddock Grill, and On the Rocks. All of these serve refreshing beverages, and The Paddock Grill also has a selection of sandwiches and salads plus a refillable mug filling station.

Adjacent to Artist’s Palette, there is a gift shop with a variety of souvenirs and necessities as well as more grocery items that you can take back to your room and prep in your kitchen!

You can also walk to Disney Springs by way of a new walking bridge! This is a very large resort though, so unless you’re staying in the Congress Park area or are up for a good walk, I would suggest the boat transportation!

When Disney built the resort, they also included an easement that would allow them to expand the monorail to this resort, which is not too far from Epcot. However, there is no monorail service here, and there are no current plans for expansion.

Disney’s Saratoga Springs Resort has lots to do for the whole family! As I mentioned above, there are two feature pools plus three leisure pools and several hot tubs. There are also splash areas for the kids. The Paddock Pool features two water slides and a bucket that dumps water every so often. While I didn’t have my son with me on this trip, I will definitely take him there in the future. Saratoga Springs seems like a great family resort!

One of our favorite recreational experiences was Senses – A Disney Spa. If you’d like to know more about our spa experience, check out this article. Senses was authentically Disney without being excessively so. I would highly recommend it.

Another favorite pastime was standing on the bridge watching the wildlife. There are several sea turtles playing in the water, ducks and birds floating about, and geckos along the paths.

I visited the Disney Vacation Club Preview Center nearly ten years ago when we took our first DVC tour. As brand new DVC Members, it was fun to return to the Preview Center and take a look around. This is the official open house and sales center, and there are several full-scale model villas of the latest DVC resorts.

Have you ever stayed at Saratoga Springs? What did you think?