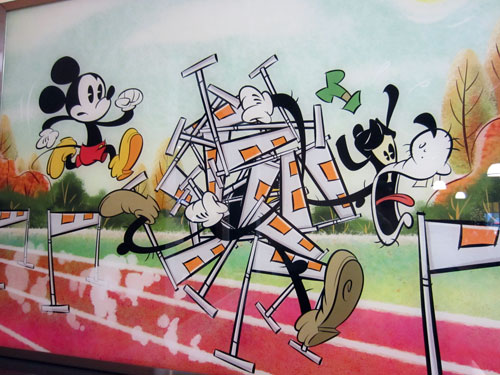 Each weekend includes several races. For example, the Walt Disney World Marathon Weekend includes the marathon, a half marathon, Goofy’s Race and a Half, a 10k, a 5k, the Dopey Challenge, the Castaway Cay Challenge, runDisney kids’ races, and a Health and Fitness Expo for runners.

If you’re planning on participating in one of the runDisney events, there are some things you’ll want to know. These events are different from your typical marathon, so be sure that you’re ready!

While dressing up is fun and not only suggested but encouraged, you should be sure to choose gear that is comfortable to run in. You won’t want to wear a full-length ball gown or a full Wookie costume because you won’t be able to run, and you’ll probably be really hot.

Speaking of being hot, you’ll want to dress for the weather, which is really unpredictable in Florida. Races are usually early in the morning before the parks open, so if you’re racing during the winter months, like in the Walt Disney World Marathon in January, it might be chilly. If you’re running in April, on the other hand, it might be very warm and/or humid. Pack layers of various levels of warmth for all parts of your costume so you’re ready for whatever the weather.

Another way that runDisney is different from other marathons is that there are characters along the race route, and you’ll be running through some iconic areas of Magic Kingdom, Epcot, Disney’s Animal Kingdom, and Disney’s Hollywood Studios. While runners usually want to get through a race as quickly as possible, runDisney runners almost always slow down a bit to snap pictures in front of Cinderella Castle, Spaceship Earth, and other park icons. There are also Disney characters along the route who will pose for pictures. Enjoy the experience especially if this is a once in a lifetime thing.

That being said, there are also runners who want to compete either with other runners or against themselves. If you want to beat your personal best or win it all, the runDisney courses are ideal. They’re mostly flat, and the races are held during times of the year that usually have comfortable temperatures and sunny days. When all of these things come together perfectly, you have a great opportunity to pick up your speed and perform really well.

Even the average Disney park guest will walk about ten miles per day, which is almost a half marathon. Too many newbies plan their race at the end of their vacation, but then they’re too tired and their legs are too sore to complete the event.

If you’re running in a runDisney race, plan to arrive the day before the race takes place. Once you arrive, relax on your arrival day then run on your first full day. Then you’ll have the rest of your vacation to enjoy the parks and maybe even show off your medal!

While there are runners who go it alone, many will say that it’s more fun to run with someone. Not only does a friend provide support, but they also help you to keep up your pace.

You can bring someone from home with you so you can run together, or you can meet a friend on the route. Disney visitors are usually a pretty friendly crowd, but runDisney visitors have a special kind of camaraderie. Many runners have made a friend while running, have stayed in touch on social media, and have returned to run together again. You really can make a lifelong friend on the race route!

Kids really embrace the challenge, and they feel like they’ve accomplished something. They love the experience. How’s that for and answer to the inevitable back to school question, “tell me what you did this summer”?

runDisney has a several events throughout the year filling nine weekends. Why not go for the longest one: a full marathon?! This 26.2-mile run takes place in all four theme parks plus ESPN Wide World Of Sports and several of the Disney resort hotels. Those who have run this race say that it’s a great first marathon since around half of the runners have never done a marathon before. Interestingly, women outnumber men in this event.

If you’re feeling really ambitious, register for every race that takes place on a race weekend. From the kids’ events to the marathons, everything is fair game.

Running can be a special experience since it often brings people together. Make your runDisney event a family affair or even a family reunion. Some runners have gotten engaged on the race route, and others have celebrated special events like anniversaries, birthdays, and more. When runDisney becomes a tradition, it’s part of the fabric of your family, and that makes it magical and memorable.

Have you done a runDisney race?