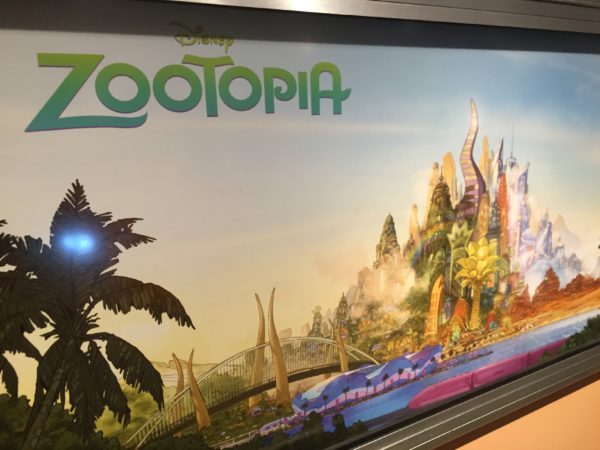 Zootopia opened in theaters on March 4th, 2016 to rave reviews. In the opening weekend alone, the movie raked in over $75 million dollars at the box office and has grossed a cool $340 million in the last year.

The movie is great fun for all ages with fun, animated animal characters for the kids and references to larger philosophical issues for the adults. There are even some allusions to Breaking Bad (Woolter and Jess are based on Walter and Jesse) and 21 Jump Street (Judy Hops is modeled after Judy Hoffs, a police officer facing similar issues). And the sloth?  Hilarious!  (Although I must say my personal experiences with the Florida DMV have been very professional and efficient.)

More than a year after the movie was a success, Disney still hasn’t put these beloved characters in the parks in a permanent way – outside of the quick and easy character meet and greets and parade appearances.

However, that might be changing if rumors are to be believed.

Rumor has it that Disney’s Animal Kingdom could see another land expansion even after the recent completion of the $500 million dollar project known as Pandora – The World of Avatar.

The land would be based on Zootopia and take the place of Rafiki’s Planet Watch and the unused plot of land that was slated for Tiger River Rapids but was nixed due to budget cuts in 1999. Since Rafiki’s Planet Watch is only accessible by train (currently known as the Wildlife Express Train but would probably be renamed if this land happens), it fits with the storyline of the movie that Judy leaves her home in suburbia to travel to the great big city by train.

This placement not only makes sense in the storyline, but it would be totally immersive since you are literally being removed from the park and taken to what could be themed as an impressive city for animals. Guests would likely experience an e-ticket attraction with some secondary attractions, dining, and shopping all themed like the movie.

Don’t get too excited. Disney did just spend mega bucks completing Pandora, and Star Wars: Galaxy’s Edge and Toy Story Land in Disney’s Hollywood Studios are set to open in the next couple years.

Plus, Bob Chapek, Chairman of Disney World Parks and Resorts, just announced that Tron would be coming to Magic Kingdom and that Epcot is going to see a renovation including a Guardians of the Galaxy attraction in place of Ellen’s Energy Adventure in the Universe Of Energy Pavilion.

At this point, Zootopia Land is just a rumor.  While I would love to see the urban jungle come to Animal Kingdom in the form of Zootopia, it doesn’t seem very likely given all the other planned investments Disney is making

Would you like to see a Zootopia Land in Disney’s Animal Kingdom?