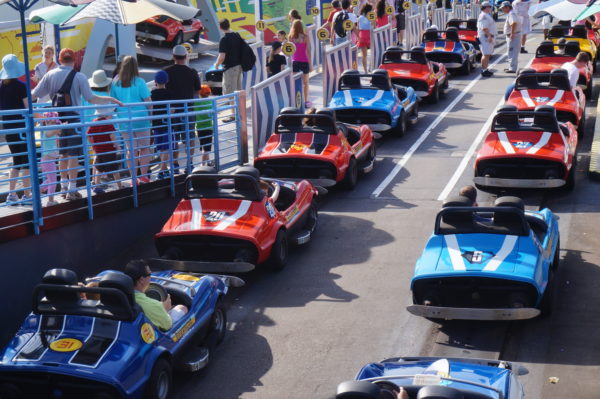 Rumor: Tomorrowland Speedway Getting an Update?

The Tomorrowland Speedway was one of Walt’s own creations. It started before he even opened his parks with his love of cars and of his grandson. His grandson also loved cars, and he wanted more than anything to be able to drive one. Walt wanted to make this dream come true for his grandson and other kids, so he built Autopia in Disneyland.

When Walt was planning Disney World, he knew he wanted to incorporate this attraction. While it was forward thinking at the time, the Tomorrowland Speedway in Magic Kingdom‘s Tomorrowland has become outdated over the years.

The go-kart-like attraction is a noisy, gas-guzzling attraction. It’s still pretty popular, but with TRON and its futuristic lightcycle run transportation on the way, it’s becoming more and more obvious how much the Speedway needs an update.

Autopia was recently updated with eco-friendly electric cars. Plus, Disney is going to start building TRON between the Speedway and Space Mountain. To add to this, Tokyo Disneyland recently closed down their version of the speedway called Grand Circuit Raceway to make room for a Beauty and the Beast Attraction.

It seems like perfect timing for the Tomorrowland Speedway to be updated.

To add fuel to the flame of rumors, some people have said that they’ve seen the cars from Tokyo Disneyland sitting behind Tomorrowland Speedway in Magic Kingdom. Rumorists with some connections say that these cars could be used as backups while Disney World updates its own cars with full electric engines. The shift would be pretty easy since the cars are pretty basic, but lots of cars would have to be removed at once for the overhaul to be successful.

If this were to happen, the attraction would remain largely unchanged while bringing the modern electric technology into Tomorrowland. If you look closely at the concept drawings of TRON, you’ll notice that Tomorrowland Speedway looks slightly different from its current state. Is that just another sign that the Speedway is up for a makeover?

Maybe. If so, it’s likely that the project will be completed in time for Disney World’s 50th anniversary in 2021.

Should Disney switch from gas to electric cars at the Tomorrowland Speedway?