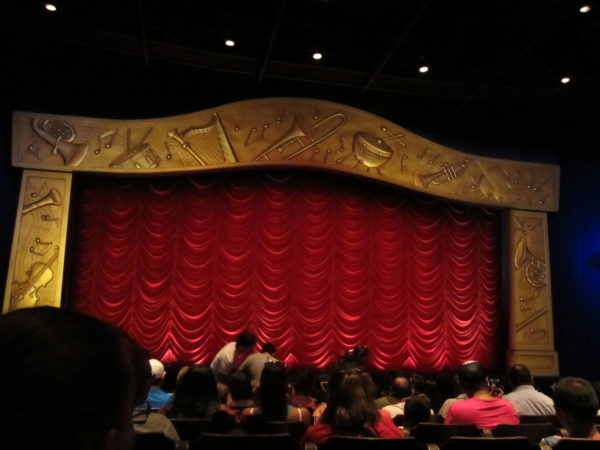 Rumor: PhilharMagic Makeover On The Way

When Mickey’s PhilharMagic opened in 2003 Magic Kingdom‘s Fantasyland, it was a unique attraction in many respects.

It was shown on the world’s largest screen built especially for this video at 150 feet wide.

It was also one of the only times that Disney’s Imagineers collaborated with another division of the Walt Disney Company, Walt Disney Animation Studios in this case.

This 12-minute video showcases some of Disney’s best films including Beauty and the Beast, The Little Mermaid, Peter Pan, Aladdin, The Lion King, and Fantasia while adding 4D effects like smell cannons, water sprays, smoke, and even an animatronic Donald Duck who soars through the air crashing into the brick wall.

Disney recently opened PhilharMagic in Paris on October 1st, 2018, using the same dated technology.  It is fairly obvious that the attraction doesn’t include any movies made after 1994, which is pretty noticeable consider their recent blockbusters (hello – no “Frozen”??)

At the time of its release, the video was crisp and clean. But by today’s standards, the video quality is a little old school. Sure, this could be age, and it could also be because the video has been played a few hundred thousand times.

Rumor: PhilharMagic is getting an update!

Rumor has it that PhilharMagic is getting a makeover, though!

Rumors suggest the makeovers will happen in the next two to three years with Tokyo Disneyland being the first. The target will be to update the attraction before before the 2020 Olympics taking place in Tokyo.

Walt Disney World in Orlando, Florida will celebrate its 50th anniversary in 2021, so it will likely be next.

Hong Kong Disneyland is in the process of a complete castle rebuild, a first for any Disney park, and Paris just opened this attraction, so the timeline for those is probably further out.

The new show will likely not include an entire rebuild of the theater. It will, however, likely include a new, or at least digitally re-mastered, video.  Expect the addition of recent blockbusters like Frozen, Tangled, and Moana. The current video includes one of the first computer-animated versions of Mickey Mouse, so some parts might just receive some touch up so as not to damage the nostalgia.

The new show will likely be close in length to the current show, so some parts will probably be shortened or removed completely. Since the entire video will change in some aspect, there will be new 4D effects. In all, the update shouldn’t mean an extended downtime for the actual attraction. The video can be created outside of the attraction and they will only need time to install the new digital projection system and the new 4D technology effects.

Historically, Mickey’s Philharmagic hasn’t had many regular refurbishments. There was one in early 2009 and one in mid 2014, so it is hard to predict when this might happen.  However, MyDisneyExperience lists show dates for the next six months, so it would be at least mid-2019 before a change might happen in Florida.

Should Mickey’s PhilharMagic get an update?