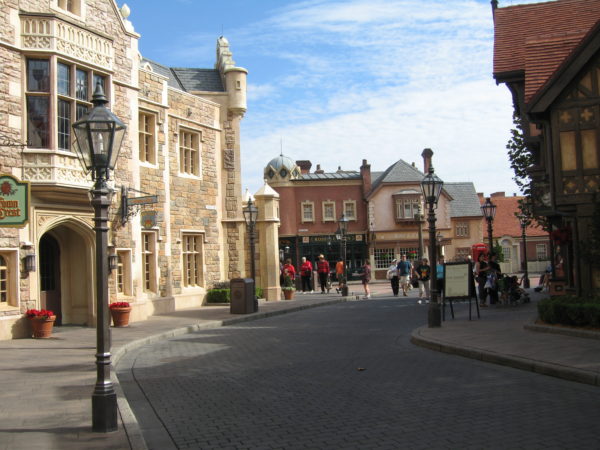 Street in the United Kingdom

Mary Poppins, released in 1964, was one of the last movies that Walt Disney personally worked on.  It features one of his favorite songs – Feed the Birds. It earned 13 Academy Award nominations for Best Film Editing, Best Actress, Best Original Music Score (thanks to the Sherman Brothers), Best Visual Effects, and more including Best Picture, which was the only nomination of its kind during Disney’s lifetime.

Nearly 50 years after its release, it was preserved in the National Film Registry in the Library of Congress. Mary Poppins is considered Walt Disney’s best live-action film achievement.

Could Disney really make this movie any better? They’re going to try. The studio has announced that Mary Poppins Returns will hit theaters on Christmas Day, 2018.

To capitalize on this historical movie and its sequel, rumors suggest that Disney is considering adding a Mary Poppins attraction to the United Kingdom pavilion in World Showcase, which is currently void of any ride.

A Mary Poppins attraction has been rumored for years, but it’s recently gained more traction with the announcement of the Mary Poppins Returns movie as well as the dramatic makeover of Epcot‘s Future World. The new movie will revive interest in the story.

Tony Baxter, iconic Disney Imagineer, designed a Mary Poppins ride concept before joining WED Enterprises, later Disney Imagineering.  His design showed guests riding carousel horses past iconic scenes from the Mary Poppins film, which was filmed entirely in the Disney Studios in California in front of painted scenes of London. Baxter’s plans were released to D23 Fans in 2016, and it seems that they could be revived in some way or another.

The current talk includes a Cherry Tree Lane recreation plus a dark ride. While there’s no carousel currently in the plans, there would be room for it if they decided to add it later since it was once included in the concept. However, the carousel idea could be removed from the plans in favor of a larger-budget Cherry Tree Lane, which is prominently featured in the movie trailer.

Rumor has it that Disney could break ground for this attraction as soon as this year with an opening date goal of 2020, just before Disney World’s 50th Anniversary Celebration in 2021. Disney hasn’t made an official announcement yet, but that could come as early as May during a media blitz or as part of the movie marketing later this year.