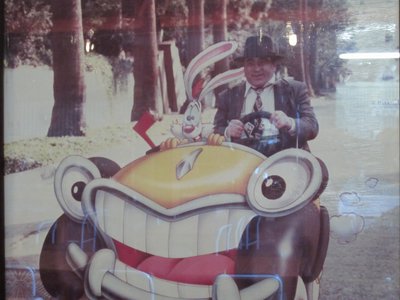 I believe that one of the fun things about visiting Walt Disney World is seeing all the tributes, hidden jokes, and memorabilia that is scattered throughout the park. Some of these objects are obvious and are in plain sight, like the many tributes to Walt Disney, while other memorabilia is less famous or less obvious – but still fascinating when you know the story behind it.

While Disney’s Hollywood Studios is (sadly) no longer a working movie studio, it still has plenty of the real Hollywood to see throughout the park.

Let’s take a look at one very interesting artifact from Disney history that you can find in this park – one that is often overlooked and easy to miss.

Back in the late 1980s, when Disney and Steven Spielberg’s Amblin Entertainment released the movie Who Framed Roger Rabbit, it was an unexpected hit and considered to be the start of a Disney animation renaissance. Disney often points to The Little Mermaid as the rebirth of animation at the company, but that is probably because they didn’t fully own the rights to Roger Rabbit – and they did fully own the rights to Mermaid. But that is a story for another day.

One of my favorite Disney writers, Jim Korkis, has written an extensive article about the history of Roger Rabbit memorabilia at Disney World. His article talks about how Roger Rabbit could have been one of Disney’s hottest characters but ultimately it didn’t work out that way. Still, you can some evidence even now of Roger Rabbit around Disney World.

The Backlot Express is a counter service restaurant in the Echo Lake section of the park. It sells typical theme park fare: hamburgers, chicken nuggets, hot dogs, and salads. While the food is fine if not special, part of the fun of this restaurant is that it is stuffed with props that you might see on a working movie lot.

And one of these props comes straight off the screen of Who Framed Roger Rabbit. Kinda.

Did you see Who Framed Roger Rabbit when it came out? It was – and still is – a fun movie. It is visually stunning and holds up well today, even though animation technology has advanced so far since the 1980s. The movie tells the story of a voyage into the world where cartoons live.

One of the minor characters in the movie is Benny The Cab, a grumpy middle-aged cab who helps the main characters Eddie Valiant and Roger escape from some tough spots.

The interesting thing is that Eddie is a human, while Roger and Benny are cartoons. The movie shows in a very convincing way that a human gets into a cartoon cab with a cartoon character and races off through the streets of the human world. Cool. But how did they do that?

Disney achieved the effect by creating a metal frame that held the human Eddie. A stunt driver sat behind him and wore a black jumpsuit that completely covered his body and even his face (with mesh he could see through to drive). The crew filmed the scenes of the metal frame, with Eddie inside, driving around the streets. Later animators drew images of Benny The Cab and Roger Rabbit and placed them over top of image of the metal frame car, creating a convincing illusion of a human riding in a cartoon car.

You can still see that metal frame car, together with some photos of the production process, at the Backlot Express.

Let’s look as some photos from the restaurant.

The end results of all this work is movie magic. Here is a video clip of a scene from Who Framed Roger Rabbit, showing Benny The Cab whisking away the human Eddie and the cartoon Roger through the streets. Just ignore the Swedish subtitles and enjoy the fun.

In some small ways it seems that pieces of Roger Rabbit are actually returning to Disney World – but perhaps more from a nostalgia perspective and not a full push to reinvigorate the brand. I’ve seen several products with images of Roger’s wife, Jessica Rabbit, throughout the park recently.

Do you like seeing Roger Rabbit memorabilia at Disney World?