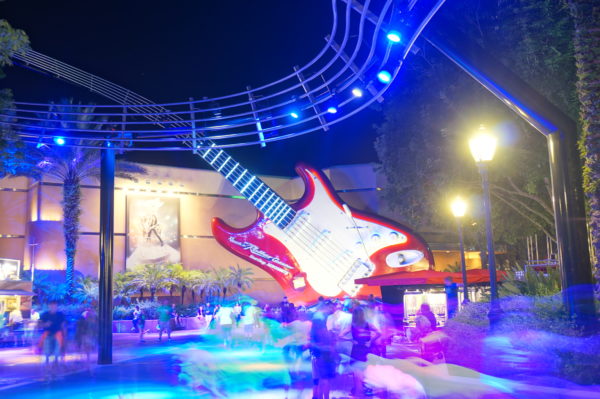 When Disney-MGM Studios (now Disney’s Hollywood Studios) opened on May 1st, 1989, the concentration was on it being a working movie and television production studio.  There were very few attractions – limited to only The Great Movie Ride and the Studio Backlot tour.

Star Tours opened on December 15th, 1989, but it would be six years before the park had a thrill ride. Twilight Zone Tower of Terror opened in 1994 on Sunset Blvd, but Imagineers had even more plans. Construction began on Rock n Rollercoaster in February 1998, and was finished by June, but Disney couldn’t get a band to agree on a contract.

Disney originally wanted Rolling Stones; while the band was interested, they wanted $10 million dollars a year and put several restrictions on what Disney could use and how. Kiss was another option, but they also wanted a lot of money. Disney also talked to U2, but they weren’t interested.

Finally, Disney spoke with Aerosmith who was excited about the project and dived in to help Disney with every aspect of the attraction – even recording new lyrics to Love in an Elevator making it Love in a Rollercoaster and appearing in the pre-show. Steven Tyler described the experience as “audio gymnastics.” On July 29th, 1999, 20 years ago today, Rock n Rollercoaster opened on Sunset Blvd.

When the attraction opened, Disney-MGM rolled out the red carpet- literally. Aerosmith appeared at an invitation-only party where guests arrived in stretch limos, enjoyed an all-you-can-eat buffet and an open bar, and rode on the new rollercoaster with a member of the band. Reports say that Steven Tyler and Joe Perry rode the coaster 12 times that night.

When you enter the attraction, you see a 40-foot tall Stratocaster guitar and various memorabilia and show posters in the queue. Eventually, you get to the recording studio where Aerosmith is wrapping up for the day before a concert across town. The story goes that Steven Tyler wants to give all of the people in the studio backstage passes and a ride to the concert, but traffic is heavy, so they have to go fast.

Rock n Rollercoaster Starring Aerosmith was the first Disney attraction with multiple inversions, and it’s the fastest ride on property. There are three inversions including a half vertical loop, a half corkscrew, and a sea serpent roll, and the stretch limo accelerates from 0 to 57 miles per hour in 2.8. seconds giving riders the feel of 5 g-forces on a track just over 3400 feet long.

There are five trains designed in the style of a 1962 Cadillac with four running at a time plus a sixth in refurbishment. Each train has 24 seats, and each seat has six speakers in the headrest plus a subwoofer positioned under each seat. There’s a total of 900 speakers and 32,000 watts of power in the attraction.

Each ride vehicle plays a different song or songs, so there are five different versions of this 75-minute coaster experience.

Disney opened a similar attraction in Disneyland Paris on March 16th, 2002. This attraction will soon get an Avengers-themed makeover, but the Disney World version will not be subject to this change – at least not yet.

In 2007, Rock n Rollercoaster added a FastPass+ line and a Single Rider line, but it remains one of the hardest-to-get FastPass and one of the longest wait-times.

With the exception of a few minor changes to the pre-show, like the option for a Roadie to get the black Les Paul, the attraction is largely the same as it was 20 years ago.

Are you a Rock n Rollercoaster fan?