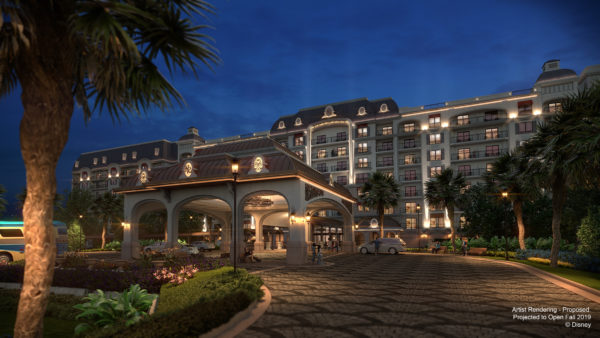 Disney has released a video taking viewers on a our of the new resort with interludes explaining how Disney Vacation Club Membership works.

You can watch the video at ArtofRiviera.com.

Watch the teaser video, indicate whether you are already a DVC member, and complete the entry form. Then you’ll be taken to the 15 minute video. After watching the video, click “Submit Entry” and you’ll be registered to win a five-night stay at Disney’s Riviera Resort when it opens; 360 other lucky viewers will win a $25 egift card. Entries are being accepted now through October 8th, 2019.

The video includes interviews with Imagineers who explain how Walt’s appreciate of art and artists influenced the development of Disney’s Riviera Resort.

The Imagineers explain that 140 disciplines including artisans, carpenters, culinary artists, transportation experts, and more who have virtually limitless creative freedom in their careers at The Walt Disney Company.

At a very surface level, Disney’s Riviera Resort is inspired by Walt’s visits to the Riviera, the first of which was in 1919. Walt loved Europe and used European culture in nearly everything he did. While he and Lillian were touring, he purchased books and sent them back to the studio; these books, including Pinocchio, were then used in Disney’s animated films. When you look at the details of the architecture, you can see these influences including the color scheme and Disney characters in art and architecture. One Imagineer notes that the attention to detail creates a sense of place – a strategy in which Disney has excelled!

Disney’s Riviera Resort includes villas inspired by European apartments and a new category of room called Tower Studios. There’s plenty of recreation at the resort including equally themed pools – one with a water slide and one quiet pool – plus an interactive water feature similar to European public fountains with some touches from Disney’s Fantasia and bocce ball! After all of this recreation, you’ll need some good food, of which there is no shortage! The culinary Imagineer notes that every dish at Disney World tells a story, and Riviera’s restaurants evoke the cliff-side eateries of old-world Europe. Topolino’s Terrace, taken from the Italian name for Mickey (“Topolino”) offers not only amazing food but also impressive views of fireworks at nearby Epcot and Disney’s Hollywood Studios.

Riviera guests will also have access to the brand new Skyliner, which is itself a nod to Walt’s fascination of innovative transportation. The Imagineer interviewed in this section says that transportation should be just as magical as other experiences including themed stations.

Watch the video to learn more, and start planning your visit to Disney’s Riviera Resort now!

Would you like to stay at Disney’s Riviera Resort?