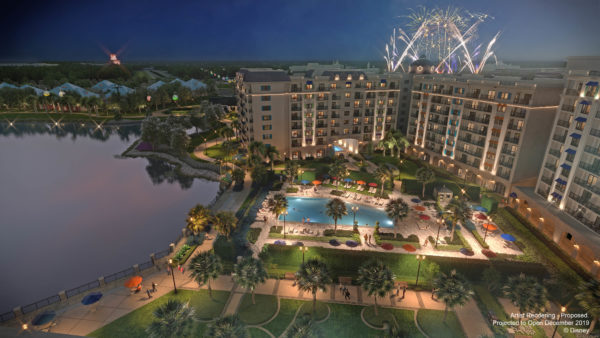 Disney’s Riviera Resort will host its first guests on December 16th, 2019, but I attended an open house that granted me exclusive access to Disney’s newest Disney Vacation Club Resort. I got to check out the room models at Disney’s Saratoga Springs Resort and Spa, and I was treated to some delicious food and beverages.

In addition, I attended a panel discussion including the art director, the sales director, and two chefs. The discussion was moderated by a Walt Disney World Ambassador followed up by a question and answer session.

Let’s take a look at what I learned!

Disney’s Riviera Resort is ideally situated between Epcot and Disney’s Hollywood Studios. This means that you will be able to see nighttime fireworks from both parks! Not only this, but you’ll also be able to see the beautifully colorful rooftops of Disney’s Caribbean Beach Resort of which the land of Riviera used to be a part.

The Tower Studios – and the resort’s signature “RR” logo – appropriately face the Italy Pavilion in World Showcase as an homage to the resort’s inspiration.

Disney’s Riviera Resort brings us several different options of accommodations including a Tower Studio, which can sleep two adults plus an infant, Deluxe Studios, which can sleep four adults and a child comfortably, and One-Bedroom Villas, which also sleep five. Two-bedroom villas are available and are made by linking a one-bedroom villa with a deluxe studio.

The rooms are carefully designed to maximize your enjoyment and efficiency. For example, in the one-bedroom villas, the terrace can be accessed by way of the main living room and also via the master bedroom, so if the kids are sleeping, you can enjoy some R&R (get it?) on the patio!

The laundry is located in the front of the room adjacent to the door. This also minimizes the noise of doing laundry so you won’t be kept awake.

The bathrooms are exquisitely appointed with marble-tiled walls, granite countertops, and luxurious showerheads. One-bedroom villas also have a soaking tub in the master suite. Each area of the bathroom is separate, so if you’re traveling with friends who aren’t quite family, someone can be showering, for example, while another uses the sink and mirror.

One of my favorite bathroom details is that it is accessible via barn doors that are synchronized, so just effortlessly pull one side, and they both close.

Three-bedroom Grand Villas, which sleep up to 12 guests, are also available, though these were not part of the open house tour.

Tower Studios are a new form of accommodation inspired by typical accommodations in the Mediterranean. There are two-dozen, one-room, pie-shaped studios that feature a queen-sized murphy bed that can be pulled down at night and stowed away during the day. The sofa doesn’t have to be taken apart to pull down the bed- just pull down and push back up! The couch goes with it! Tower Studios also feature a quaint writing nook, a kitchenette with a coffee pot and microwave, lots of storage, and a modern but classically-inspired bathroom.

I don’t know about you, but one of my favorite parts of any resort is the pool! Riviera Resort has two pools. The Riviera Pool is the feature pool, and guests can lounge by the pool in comfy chairs under colorful sun umbrellas. There is a fun, 30-feet (nearly two stories) tall, winding stone turret slide inspired by the stone tower relics that can still be seen on the Mediterranean coast. The pool is 105,000 gallons of pure bliss.

Also in the Riviera Pool area, there is an interactive water play area called S’ii Vous Play. This is a fun play on words; “S’ii Vous Plait” means “if you please” in French. The art director explained the area as being inspired by a public fountain that you can now jump right into and play! It has a Fantasia theme complete with an ostrich, a hippo, and an elephant all frolicking in the water.
Beau Soleil, translated as “lovely sun”, is the resort’s second pool. This leisure pool is surrounded by a natural, lush green wall to make the area semi-private. Pool hopping privileges for DVC guests staying at a different resort are yet to be determined.

Guests will also enjoy a bocce ball area, Athletique fitness center, and a flexible Community Hall off the main lobby where you’ll find both traditional and new experiences.

Riviera Resort (stylized as RR), is inspired by Walt and Lillian’s travels around Europe and specifically the Italian and French riviera from the French Côte d’Azur to the Ligurian shores and by the 80+ stories that Walt brought home with him!

Some of these stories became movies, and you can hear the sounds of these beloved movies, including Ratatouille, Lady and the Tramp, Beauty and the Beast, and more throughout the resort. There will also be other music, but all of the music will be reflective of the region.

Disney’s Riviera Resort is “Inspired by Europe and Imagined by Disney”.

It’s all in the details

The “RR” atop the Tower Studios represents the bright, giant marquees that can still be seen at the hotels along the Mediterranean so guests can identify them from afar.

The accommodations are beautiful (there’s no denying that) but they’re also practical. There is storage everywhere, and the space is used very well. For example, when the murphy beds are pulled down, there are small shelves on either side. On the lowest-level shelves, you’ll find outlets with standard plug-ins and USB plug-ins. Every outlet in the room offers this modern amenity.

The spaces are also used very well! In the living room of the one-bedroom villa and the deluxe studio, the TV cabinet pulls down into a twin bed.

In the Deluxe Studios, there is storage under the beds very similar to what is available in the Disney Cruise Line cabins. There is also storage in the dining room in the form of drawers under the bench seating.

The couch in the living space of both rooms also pulls down into a murphy bed. The best part is that you don’t have to move any of the couch cushions- just pull down, and the pillows fold down automatically. When you’re ready to get up, just pull up, and it’s a couch again!

Let’s take a look at some of the other details.

Disney’s Riviera Resort is inspired by the French and Italian Riviera, and the artwork reflects this theme.

Take, for example, the painting behind the couch in the Deluxe Studios. It looks like just another Italian village, but if you look closely, you’ll see Lightning McQueen cruising down the aqueduct and a grill of a car in the hillside. Yes, this painting is inspired by Cars 2 in which McQuen and Mater visit cities around the world including Italy.

Speaking of hidden details, there are hidden Mickeys everywhere you look!

Mickey is the main man – or should I say mouse – but we can’t forget his main squeeze – Minnie Mouse! She’s given more attention than ever in Disney’s Riviera Resort. You can find a hidden Minnies in the hallway carpet and photos of her on the walls of the one-bedroom villa above the murphy bed. You can tell the difference because of her signature bow!

Disney says, “Throughout the resort and inside the accommodations, guests will experience a variety of art including Disney concept art with European settings, posters of Disney films as released in Europe, archival photography of Walt Disney’s travels throughout the region, and book titles Walt Disney gathered on his journeys.” They also note that there will be more than 40 signature art pieces that were created exclusively for this resort.

I got to try some of the food that will be served at the resort, and let me tell you – it was absolutely delicious! Keep reading for photos of the food!

Topolino’s Terrace – Flavors of the Riviera, the main table-service dining offering at the resort, gets its name from – you guessed it – Mickey Mouse! “Topolino” is the Italian name for Mickey, so it’s fitting that this would be Riviera’s premier signature dining experience. Topolino’s is located on the rooftop of Riviera and will offer incredible French and Italian cuisine, an onstage kitchen with a wood-burning grill, and incredible views of two parks. If you time it right, you just might be able to see the fireworks shows at both Epcot and Disney’s Hollywood Studios.

The menu includes a variety of meats and seafood, artisanal pastas, fresh-pressed olive oil, and gourmet cheeses, plus a collection of wine from the South of France and Coastal Italy.

As far as the look of the restaurant the art director says that, while the resort will have classic inspirations, they have interpreted the classic into the modern for textures, colors, carvings, and stonework. Topolino’s is inspired by the cliffside restaurants of Europe. When prompted, the primary chef for this restaurant recommended the antipasto and handcrafted pastas and specifically the Pâté de Campagne, which was noted as the most complex dish on the menu.

In the morning, Topolino’s will offer a Storybook Dining Character Breakfast with a prix-fixe menu and visits from Mickey, Minnie, Donald, and Daisy in outfits inspired by the French and Italian Riviera. Advanced Dining Reservations are available starting January 19th, 2020 and are recommended.

The poolside bar at the Riviera Pool is called Bar Riva. Bar Riva is an open-air pool bar with a relaxed European Coast vibe. Guests will enjoy poolside service with food and drinks made-to-order. You can even find the very popular Monte Cristo Sandwich first made popular in Disneyland’s Blue Bayou. The difference is that the East Coast version uses strawberry jam instead of raspberry jam.

Le Petit Café, a French patisserie, is named after a café in The Aristocats. You’ll find coffee and lattes during the day, and it transitions to a wine bar with sparkling beverages and desserts at night. Diners at Le Petit Café will enjoy views of the pool from the resort’s lobby. One of the chefs noted that, while Le Petit Cafe is a quick-service dining location, your meals will be served on real plates unlike other quick-service locations in Disney World!

Primo Piatto offers dining along the Riviera Promenade in a quick, casual setting. Primo Piatto will also have several grab and go items!

The Chefs de Cuisine say that they paid close attention to every detail including unique vessels inspired by the region including one paying homage to the pebble beaches. Disney is being very protective of some of these finer details. We were even told that some of our questions during the panel discussion couldn’t be answered because they wanted to keep some surprises for opening day!

Even if you aren’t staying at the resort, you should definitely book your Advanced Dining Reservations! You won’t regret it!

Disney’s Riviera Resort will have full-service bus transportation including Disney’s Magical Express from and returning to the Orlando International Airport as well as the theme parks, water parks, and Disney Springs.

The Riviera is also on the brand new Skyliner route. The Riviera stop is shared with Disney’s Caribbean Beach Resort; there are also stops between Disney’s Pop Century Resort and Disney’s Art of Animation Resort, Disney’s Hollywood Studios, and Epcot’s International Gateway. The Riviera station features a tunnel archway with sparkling water features. The Skyliner offers incredible, never-before-seen views from the sky with some really cool photo ops. The Skyliner cabins are wrapped with graphics of Disney films, attractions, and characters. While the Skyliner services many locations, it is inspired by similar European-style transportation.