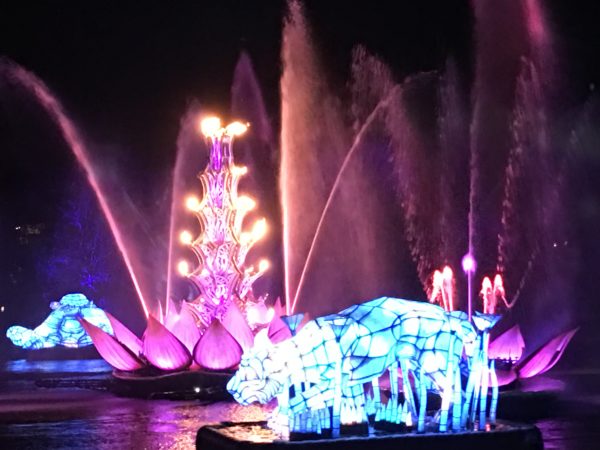 Rivers of Light is a new nighttime show in Disney’s Animal Kingdom. For the first time ever, Animal Kingdom has permanently established itself as a full-day park.

The nighttime show is highly technical with lots of moving parts, so it should come as no surprise that the show was delayed almost a whole year. It was set to debut on April 22, 2016, but the first public showing was Friday, February 10th, 2017 with an official opening date set for a week later.

The show is full of symbolism, storytelling, and theatrics with a visual mix of water, fire, nature, and of course light. It’s set to a new musical score.

Let’s take a look at the show and how it fits into the theme of Animal Kingdom.

About ten minutes before the show actually starts, several lotus flower floats take position in the Discovery Island Lagoon. There are also images of animals projected across the lagoon.

The lotus flower has long been a symbol representing peace and prosperity. The beautiful flowers usually live in murky ponds and provide welcome relief from the ugliness surrounding it.

While this is a pre-show, you’ll want to get to the theater early not only to get a good seat (or a seat at all) but also to enjoy these floats and projections before the show actually starts.

As the show itself begins, boats arrive in the lagoon, and the shamans on board start dancing. The only talking is done by a narrator, and he only speaks at the beginning and at the end of the show. These are his opening lines:

“Of all the gleaming planets in our vast universe, it is only here on Earth that water and light harmoniously unite to create the wonder of life. We most graciously welcome you to a timeless celebration of water and light with roots as far reaching as time itself. Here, where the forces of nature meet in harmony, the spirits of the animals are free to dance together in the night sky creating Rivers of Light. We are united in this special place to celebrate the magnificence and wonder of all living creatures, for in life we are all one. ”

As the 15-minute show progresses, a total of eleven floats enter the lagoon. First there are fireflies as we head on a journey through the natural world. At this time, the shamans call on the animal spirits by way of dance. Aditya calls the tiger with a horn, and Aseema sends the turtle spirit and the owl. The animals take us through images of Asian Jungles, Tropical Oceans, African Savannahs, and North American Mountains. An original song, We are One, plays in the background.

The last float is a giant temple lotus. The animal spirits are projected on water screens that come from the lotus flower floats shooting water into the air. You can see images of the aurora borealis, a breach of a humpback whale, and the show ends with animal-shaped constellations.

As the show comes to an end, the narrator returns to tell us this:

“Within each of us is a light, a light that shines in all living things. Here where fire and water bridge the earth and sky, our light rises on the wind to join the stars. As we journey on this great earth, may we remember the light we share. May we celebrate our bond with the natural world and the wonders that flow on Rivers of Light.”

Like the park in which it resides, Rivers of Light is decidedly un-Disney.

There are no Disney movie references, and there are no characters dancing gleefully on floats. Instead, this show attempts to celebrate the beauty of all living things and the power of coming together to appreciate life for what it is.

It is not a typical Disney nighttime spectacular, and it’s not meant to be compared to Wishes at Magic Kingdom or Fantasmic at Disney’s Hollywood Studios (although it is impossible to not make that comparison).

In a sense, it is more like IllumiNations at Epcot. It tells a story, and there’s a deeper meaning behind it than just fun fireworks and fanfare – but in an abstract way.

The show attempts to captures the heart of all that Disney’s Animal Kingdom is and all that it stands for while captivating the audience with technologically advanced cinematography elements.

The theme of “everything the light touches” gives a nod to Eastern Festival Traditions, which use lanterns and light to celebrate special occasions. This too, is appropriate for the theme of the park as a whole.

What’s more, all communication takes place through traditional Asian dances, songs, and shadow puppetry. The only human element to the show is the few lines that the narrator says at the beginning and end of the show.

The new musical score by Don L. Harper is called “We Are One” is played at a prime point in the show.

So, was it any good?

Pulling off a show that lives up to the title of “Disney Spectacular” is a tall order.

On the positive side, the technology was great and the show was colorful and beautiful in its own way.

On the not-so-positive side, for me, the music wasn’t especially stirring, and I had a bit of a hard time following the story.  The end just seemed to happen – I don’t think the audience really knew if the show was over or not until an announcer said it was time to go.

Did it live up to the lofty title of “Disney Spectacular?”  Maybe not as much as I had hoped.

Still, Disney could change the music and storytelling using the same theater, technology, and floats.  Maybe we will get a version 2.0 one of these days?

Rivers of Light: will you see it?