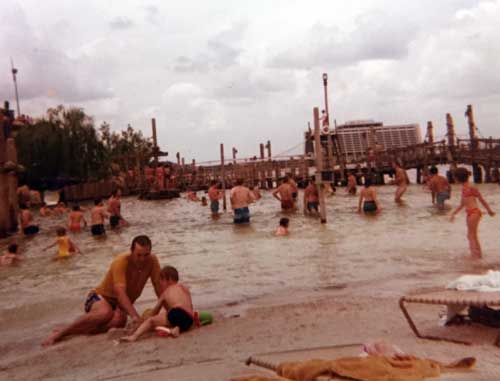 Do you remember River Country? Disney’s first water park that was modeled after the ‘ol swimming hole, and featured items like two water slides, a tire swing, and a barrel bridge. After it opened it was a smash hit. People often couldn’t get in because it quickly filled to capacity.

If the park was so popular, why is it closed? Is it coming back?

Let’s look at three sad reasons why River Country closed, and why it isn’t likely to come back:

Part of the reason why Disney built River Country was to get people out of the existing Disney resort hotels and into something that would cause them to spend more money. Disney built the water park in 1976. It was far more popular than expected. In fact, it was so successful that it was constantly full. Jeffrey Katzenberg, a top executive at Disney back when Michael Eisner was CEO, found this out himself. He took his family to Disney World and tried to go to River Country. It was full, and he couldn’t get in – even though he was a top executive with the company! The legend goes that Jeffrey then talked with Michael and convinced him that Disney needed another water park, and that is why the company decided to build Typhoon Lagoon – which opened in 1989.

River Country was built on the shores of Bay Lake. In fact, in those early days guests could go swimming in Bay Lake itself, and the River Country pulled its water supply from the lake. But here were two problems with that set up. The first is that Bay Lake, like every other natural body of water in Florida, has alligators. The second is that the lake, like nearly every other natural body of water, contained amoebas and other nasty microscopic critters that can create health issues. These are issues that are difficult to solve (in the case of the water source) and impossible to solve (in the case of alligators).

River Country was in a great location for those who were staying at Disney’s Fort Wilderness, but it was in a terrible location everyone else. To get to River Country, you had to park in the Fort Wilderness entrance area, take a bus through Fort Wilderness to near Bay Lake, and then walk to the water park. It just wasn’t in a convenient place for most guests.

Aside from all the issues above, River Country had to deal with decreased attendance levels after the September 2001 terrorist attacks. Disney closed the water park in November, 2001, but didn’t make an announcement that it would not reopen until 2005. By that time, both Typhoon Lagoon and Blizzard Beach were well established, much more modern and thrilling, and didn’t have the capacity, safety, and location issues that still stood with River Country.

The site has sunk into disrepair. You can check out this video of some urban explorers trespassing on the dilapidated site.

Note that visiting the now-closed River Country is a really bad idea.  A man who calls himself Adam The Woo trespassed onto River Country property, and Disney has now banned him from Disney property for life.  Ouch.

According to Jim Hill, rumors have it that a new Disney Vacation Club resort might someday take over the current location where River Country sits.  It would be a great location for a new vacation club property – with beautiful natural views and boat access to the Magic Kingdom.  But I think we would still miss River Country.

Did you ever visit River Country?  Miss it?