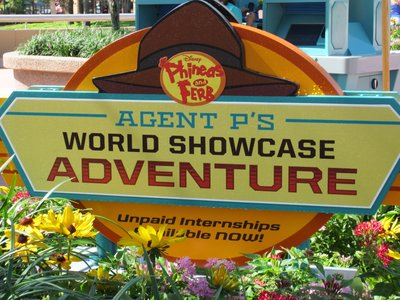 I had a chance recently to the game. Here are my thoughts.

When you approach the cast member at the recruiting station, you will notice they are wearing green shirts, which will remind you of the Agent P himself. They scan and your Disney World ticket and give you your Field Operative Notifications Equipment – otherwise known as a FONE. This FONE is a Verizon wireless telephone with a color display the plays animations and audio.

Now that you have your FONE, you can watch and listen to an introduction about how to play the game, and your specific mission. My mission began in China. The evil Dr. Doofenshmirtz had plans you unleash an evil De-Panda-Nator – which of course is a device to turn cute Chinese pandas in to not so cute monochromatic pandas. The concept was great. In order to stop the evil doctor, I had to solve several mysteries.

The FONE directs you to several different places around the Chinese pavilion where you solve mysteries. For example, in one part of the game I was directed to a shop window where a bird was sitting in a cage. By pressing a button on my FONE, the bird inside a cage came to life and turned around a piece of paper with a series of numbers on it. I entered those numbers into the FONE to accomplish the task.

In another example, I was directed into a different shop window. When I pressed a button on my FONE, the pagoda in the window expanded up, revealing numbers that I also needed to enter into the FONE.
Yet another example was where I entered my birth date into the FONE and then watched the Chinese zodiac in a shop window light up, matching my Chinese zodiac symbol that was based on my birthdate.

I really enjoyed the story that my FONE presented to me. The animation was well done for a mobile phone, and the storyline itself had that classic Phineas and Ferb sense of humor. The story elements also matched the Chinese pavilion, where I played the game. There were references to fortune cookies, pandas, and fireworks.

I also liked the interaction with both the FONE and with the elements around the pavilion. Using the phone to activate things in the windows, for example, was fun. In getting information from the shop windows and entering it back into the telephone made of the mission seen all the more real.
I am not sure if that is exactly a con, but some of the places where you play the game are not so easy to find. You can see a picture of each of the game locations on the FONE, but even so some of them were difficult to locate. I think that is actually part of the fun of a game.

Overall I did enjoy my time applying Agents P’s World Showcase Adventure. Part of that could be that I am a Phineas and Ferb fan, but I think it is more than just that.

Disney did a nice job using the phone and to explain the storyline. And while it seems that many of the elements throughout the pavilion were reused from the former Kim Possible game, it was still entertaining to interact with those elements.

On the day that I played, there were plenty of other people enjoying the game too. They seem to be enthralled in the hunt to solve their mission. However, it would be very easy to wander through World Showcase all day and not realize that the game was going on around you. It blends in seamlessly with the pavilions.

If you are a big Phineas and Ferb fan, or if you enjoy interactive games, or if you have been to Epcot many times in are looking for a new experience, then I would definitely recommend that you try out the agent P adventure. It is easy to complete as much or as little of the team is you want. You can try it out and then return the FONE in a drop box, or you can complete a full mission in one country, or you can go on to complete many missions in many different countries.

Sixt is located just off the Orlando Airport where a shuttle will pick you and drop you off at the Sixt Orlando Location where you will be able to choose some of the best car rentals in the Orlando Area. This is a perfect location if you are looking for rental cars to take to Disney World. So if you are thinking of going to Disney World in Orlando check out Sixt Car Rental Orlando!