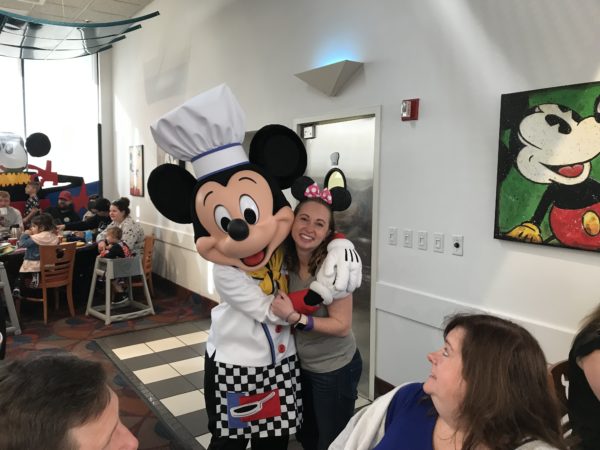 I’m a big proponent of character meals! While they’re pretty pricey, the food, most of which is all-you-care-to-enjoy buffet style, is excellent, and you get to spend some great quality time with some of the most loved Disney characters! Plus, each experience is vastly different depending on the theme of the restaurant and location.

My most recent experience at a character meal was at Chef Mickey’s at Disney’s Contemporary Resort. This restaurant is very popular; I tried to make Advanced Dining Reservations at the 180-day mark, but reservations were “sold out”. I was determined, so I called Disney World directly and explained that we were celebrating our son’s (“E”) third birthday and he loves the monorail. They were able to get us in at 9am!

We had a fantastic time, and I wanted to share our experience with you!

If you’re staying at a Magic Kingdom Area Resort (Disney’s Polynesian Resort or Disney’s Grand Floridian Resort and Spa), it’s easy to get to the Contemporary via the monorail. If you’re staying at an Epcot Area Resort (Disney’s Yacht Club Resort, Disney’s Beach Club Resort, or Disney’s Boardwalk Inn), you can get there via the monorail, but you’ll have to get to Epcot first, which is in walking distance, then transfer monorail lines at the Ticketing and Transportation Center.

Guests of all other Disney resort hotels will have to take a bus to any of the theme parks then take either a bus or the monorail to the Contemporary. We were staying at Disney’s Art of Animation Resort, so we took a bus to Magic Kingdom and boarded the monorail. This is the easiest thing to do: bus to Magic Kingdom and either walk across the street or board the monorail, which travels right through the Contemporary’s main building.

Alternatively, you can pay to take a Minnie Van powered by Lyft, but this can get expensive.

When we arrived, we checked in at the desk, gave our name and phone number, and were told to check out the lobby while we wait for a text message. It didn’t take long; shortly before our 9am reservation, I got a text that our table was ready. We went to the desk and were taken to our table!

The restaurant is laid out in several rooms with the food centrally located between them all. Each room has a variety if seating including tables and chairs and booths. They can accommodate any party whether large or small.

Everything is very colorful in mostly primary colors, and each room had kitchen access. Our waitress was very attentive, and it didn’t seem like she had many tables. Based on observation, I think there were five or six attendants for around a dozen tables, so it’s no surprise that the service felt so personal.

When we were seated, we were immediately served juice, coffee, and tea. Other beverages including alcoholic drinks, are available for an additional charge, but we stuck with those that were included! Our waitress told us to go ahead and get our food and that the characters would be out in about 20 minutes.

I’m constantly amazed by how well Disney plans things, and this was no different. It worked really well because we were able to eat a little bit before the characters arrived. Our son, who was just weeks from turning three years old, is easily distracted. We didn’t think he would eat much (thank goodness he ate for free!), but he was able to eat a little bit before he became too distracted.

Soon, the music turned up and everyone started twirling their blue napkins. We were a little confused, but we played along quickly realizing that this meant Mickey and Friends were on the way! Mickey, Minnie, Goofy, and Donald came out for pictures and autographs, but they were seemingly gone as fast as they came!

We ate a little more, and the napkins started waving again! The characters returned for some dancing and singing and more pictures then retreated again.

As we were just about finished eating, our waitress said the characters would be back shortly. As the music started and the napkins waved, the characters ran out for more singing and dancing, and our waitress arrived with a birthday cupcake for E! He was so excited to blow out the candle! However, he didn’t eat the whole cupcake. I asked for a box to take it to go, and our waitress returned with a brand new cupcake wrapped in a to go box! It was just one more reason the experience was so great!

E didn’t eat much because there was a lot of activity, but we enjoyed it!

There was a yogurt bar with all the fixin’s, fresh fruit, pastries, bagels, and spreads. Just around the corner, we found breakfast meats like sausage and bacon plus scrambled eggs. Another station had the coveted Mickey waffles with toppings galore! They had sprinkles, cherries, chocolate and caramel sauce, maple syrup, chocolate and peanut butter chips, and more! There was even an on stage kitchen area where chefs were making fresh pancakes!

I never saw an empty bowl, tray, or pan, and everything tasted so fresh! I give this restaurant five stars, and I would definitely recommend!

Chef Mickeys – are you a fan?