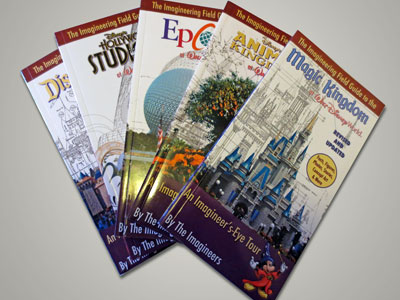 A Review of the Imagineering Field Guides

Did you know that, on Main Street in Magic Kingdom, each upper-floor window “business” references the people who originally brought the park to life?

Have you ever heard that maintenance workers in Spaceship Earth used to pencil lines onto the walls to find their way through the twisting backstage hallways?

Did you hear that the look of the Tree Of Life was based on a particular bonsai tree that designers found at the International Flower and Garden festival?

Were you aware that the Wicked Witch figure in The Great Movie Ride was the first “A-100” animatronic figure, which introduced several major improvements over previous models?

All of this information, and a lot more, can be found in a series of books known as the Imagineering Field Guides.

There is an Imagineering Field Guide for each of Walt Disney World’s four theme parks, as well as one for Disneyland and a newly released California Adventure guide. Written by the Imagineers, these books offer insights into the design and construction of the parks and the attractions within.

Full of information, the authors share history as well as behind-the-scenes stories. Some of the tidbits in the books are about fun (and often hidden) details—such as the names on tombstones in Haunted Mansion’s graveyard scene are scrambled names of designers. Others give explanations of specific construction: for example, the “random” ruts in the road on Kilimanjaro Safari are specifically placed to keep the show water that the vehicle splashes through separate from the animals’ drinking water. It’s the sort of thing that guests probably wouldn’t notice, and in many cases aren’t meant to, but the books explain these details and exactly why they were implemented.

The books are full of concept art, construction photos, and pictures from around the parks as well as stories about the design and creation of attractions. They explain seemingly random details, like cracks in the pavement that are actually placed to allow for expansion in the hot Florida sun. They also explain the specific story elements that are put into almost everything.

These Field Guides are not travel guides, so they won’t tell you which hotel to stay in or the best places to eat. Instead, they offer an insight into Disney World and Disneyland that only those involved with its creation can give. The books show how much planning goes into every detail, and they offer an amazing behind-the-scenes view of the work that Imagineers do to create the Disney parks.

The books are small (4”x8”, and about a half inch thick), so they can be easily kept in a bag. They’re laid out in the “order” that one may go through a park. The Magic Kingdom guide, for example, starts at Main Street and then works its way through each land and the attractions therein. This way, if you’re in the parks themselves, it’s easy to keep the books with you and reference them throughout your visit.

Each guide also has a chapter called Imagineering 101 (the same in each book) which offers a brief history of Walt Disney Imagineering, a list and brief explanation of each WDI discipline, and a glossary of the terms Imagineers use.

Obviously, with the speed at which the parks can change, the books can get outdated. My copy of the Magic Kingdom guide from 2009 has a section on the now-defunct Mickey’s Toontown Fair and has nothing concerning the new Fantasyland.

However, updated versions have been released from time to time:  there’s a previous Magic Kingdom guide from 2005, and EPCOT has editions from 2006 and 2010.  There is also a guide specific to Disney’s California Adventure, which was released in March of 2014.

If you’re curious about what Imagineers do and how they create Disney magic, the Imagineering Field Guides are worth checking out.

If you are interested in buying the guides, you can find them on Amazon.