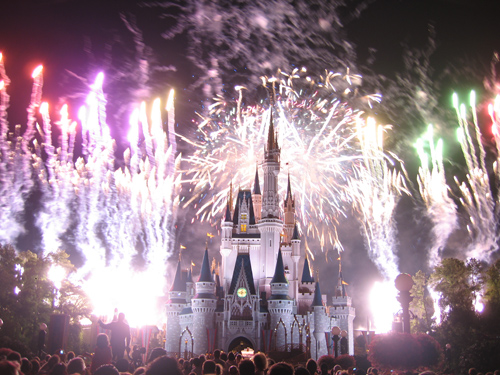 Watching the Wishes fireworks spectacular at the Magic Kingdom is a great way to cap off your day of fun in the park. The show usually takes place at 9 PM and, in a word, is “amazing.” Disney combines music and, by some estimates, more than 800 fireworks shells to create a show that is unique, moving, and beautiful.

One of the best places to watch Wishes is the Cinderella Castle hub or on Main Street USA. It’s hard to beat the view, and you get to be part of a huge crowd experiencing the fun.

However, viewing the fireworks show in the park does have some downsides. The crowds can be huge, the weather can be hot, and you are often caught up in a stampede of people exiting the park when the show is over.

Wouldn’t it be nice if you could enjoy Wishes in a nicely air-conditioned restaurant while dining on fine food?

That is very possible. In addition to seeing the show from a new point of view, and from the comfort of your dinner table, you also don’t have to pay for admission to the Magic Kingdom in order to see the fireworks.

Let’s take a look at three restaurants around the Seven Seas Lagoon where you can enjoy a meal while watching Wishes.

‘Ohana has a wall of windows which look out onto the Seven Seas Lagoon, Cinderella Castle and beyond. In addition, the restaurant more or less looks straight down Main Street USA so you get a view much like you would in the park.

While it does look like Cinderella Castle is far away from the restaurant, you get a nice, straight-on view of the fireworks.

Narcoossee’s is one of the restaurants in Disney’s Grand Floridian Resort. It sits atop the water of the Seven Seas Lagoon and is relatively close to the Magic Kingdom.

Many of the tables near the windows offer great views of the fireworks. The restaurant also has an area outdoors where you can step outside to see the show.

Narcoossee’s is a bit upscale, so you might want to wear nicer clothes if you plan dinner there.

The California Grill sits high atop Disney’s Contemporary Resort hotel. Many folks consider it to be one of the best places to catch Wishes, but it does sit at a wide angle to Cinderella Castle, so some of the fireworks will look off-center compared to the other two restaurant above.

This restaurant is upscale, expensive, and dressy. Be sure to plan accordingly.

In addition to being able to see the Magic Kingdom through the windows from your table, the restaurant also has an outdoor deck where you can view the fireworks.

For each of these three restaurants you should plan your Advanced Dining Reservation for 30 to 45 minutes before the show is scheduled to begin. Usually the show starts at 9 PM, but be sure to check Disney’s entertainment schedule for the specific show time on the day you plan to watch.

When you arrive for dinner, ask your host or hostess for a table with a view of the fireworks. They probably can’t guarantee a great view, but they will most likely do their best to accommodate you.

The music that accompanies the Wishes fireworks spectacular is an important part of the experience. Fortunately, Disney has thought of everything. They pipe the music for the show into the restaurants and even adjust the timing so that the music matches the fireworks that you are seeing from far away.

Have you ever watched Wishes from a Disney restaurant outside the Magic Kingdom?