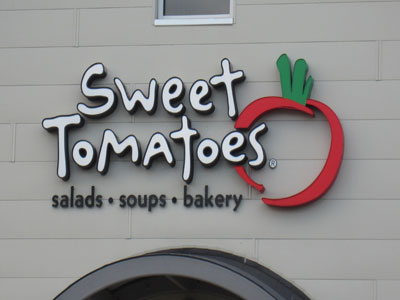 Eating at Walt Disney World can be a blast.  There are many Disney World restaurants in all price ranges, and offers a unique form of theming and entertainment with meals.  Eating at a restaurant on Disney property is also convenient for groups who don’t want to spend a lot of time exiting and re-entering the park, which can take a long time given how spread out everything is.  However, eating at Disney restaurants can get expensive quickly.

Naturally, Disney discourages bringing one’s own food into the park, because a three-dollar PBJ could deprive them of a fourteen-dollar French dip sale.  At the end of the day, some people clamor to exit the park and are often eager to sample cuisine that is not Mickey Mouse-flavored. In this article, we’ll take a look at many of the restaurants near Disney World and will also look at a few dining opportunities within Disney World.

Your Choices Are Limitless

The areas surrounding Disney World are rich in cookie-cutter strip malls and poor in varied or local fare. Nevertheless, there are some pleasant dining opportunities to be had. There’s a very helpful service for those traveling without a car called Take Out Express that will deliver from several specialty restaurants, from Chinese (Chinese Cuisine Run and Run) to standard American fare (such as Denny’s), exotic Indian (from Aashirwad and Saffron Indian Cuisine), Cariera’s Cucina Italiana, TooJay’s Deli, Tabla Bar and Grill, and T.G.I. Friday’s. Surcharges include five dollars per order (minimum fifteen dollar order) if placed on the web, six if over the phone; gratuity is added to each bill as well.

Universal CityWalk, just up Interstate 4 from Disney property, also offers several well-known mid-range restaurants to choose from, interspersed between live music venues and other entertainment. NASCAR Sports Grille (a bar with a deep fryer and corporate sponsorship) graces CityWalk alongside Emeril’s Orlando, the trendy celebri-chef experience. No cut-and-dried dining area would be complete without a Bubba Gump Shrimp Co., hawking its tiny delights prepared in numerous ways. Spreading one love along the boardwalk like a slow-moving cloud is Bob Marley – A Tribute To Freedom, a reggae celebration designed to mimic Marley’s own Kingston, JA home. Just up the stairs on the second level is Fusion Bistro Sushi and Saké Bar, part of a chain of successful sushi spots. The atmosphere is lively here and the sushi offerings lighthearted. The Hard Rock Café of course has an outpost here, where they offer the same somewhat mediocre fare that they do everywhere. The real draw here is the collection of priceless music memorabilia that’s on display for all to see. Another eatery whose scenery steals the show is Margaritaville – where Jimmy Buffett’s fans gather to watch a margarita-belching volcano.

Food from the Caribbean side of Latin America is served up hot at the Latin Quarter (somehow named for a neighborhood in Paris). Plantains, rice and other island specialties make feature appearances here nightly. Incidentally, they serve bar food. Pastamoré, on the other hand, places the emphasis on their contemporary Italian cuisine, which comes in portions large enough to appease a hungry group eating family style. Finally, CityWalk’s Rising Star and Pat O’Brien’s are entertainment venues that also serve some food; we recommend O’Brien’s Jambalaya.

And if Full Service Doesn’t Strike You, There’s Always Buffet

As would be expected, there are many buffet-style dining options in the environs, and nowhere more so than US 192 (one of the main touristy arteries for all kinds of shopping and lodging), along with International Drive (home to several outlet stores). Buffets try to lure customers in with coupons and special offers emblazoned across free tourist magazines that permeate the area.

We’ve broken buffets down by cuisine type in this article, starting with Indian. Not overly delicate, Indian food works well in a buffet thanks to its long-lastedness. However, Indian buffets generally are offered at lunchtime, when vacationers are right in the thick of their Universal or Disney days. Aashirwad Indian Cuisine and Punjab Indian Restaurant are the ones to try if the opportunity comes up.

Chinese buffets in the Orlando area are a bit lackluster; as the food sits on the steam tables it goes from well done to overcooked to dry and/or limpid.  If a group is determined to spend rock-bottom prices and doesn’t expect too much in return, they are advised to give Mei Asian Bistro a whirl.

Brazilian buffets, on the other hand, are on the rise, with steaks on skewers reigning supreme. A really good one is Vittorio’s on International.

Lobster and seafood buffets also abound in the area. The delicate flesh of lobsters doesn’t fare well atop a roiling steam table for very long, so a visit to one of these joints requires guests to be nimble on their toes to get to the crustaceans as soon as they’re brought out. Boston Lobster Feast on US 192 stands out among these as something of a paragon. Lobster isn’t the only feature catch of the day, either; a cornucopia of frutti di mare is also on tap.

You will find meaty offerings at Wild Jack’s Steaks and BBQ on International Drive, serving up a choice steak that won’t overtax the budget. There are also inexpensive entrée buffets such as Golden Corral and Sizzler that bundle the buffet with the purchase of a steak.

An Option For Eating At Disney

If you decide you want to stay on Disney property, dining within the bounds of the Disney parks can be made simpler with the purchase of a Disney Dining Plan, which come in several denominations. Disney restaurants, depending on level of classiness or popularity may require one, two, or two credits plus platinum status for a meal. Of course, most of the park’s restaurants require reservations well in advance of the fact; in general, at least sixty days ahead of time, but in some cases much more (for instance, Cinderella’s Royal Table, requiring 160 days advance and Chef Mickey’s character dining, requiring 180). It’s a good idea to note that despite this effort on the part of guests they are not sure to get a table at any appointed time due to how the Disney reservation system works.

What is your favorite off-site restaurant, near Disney World?