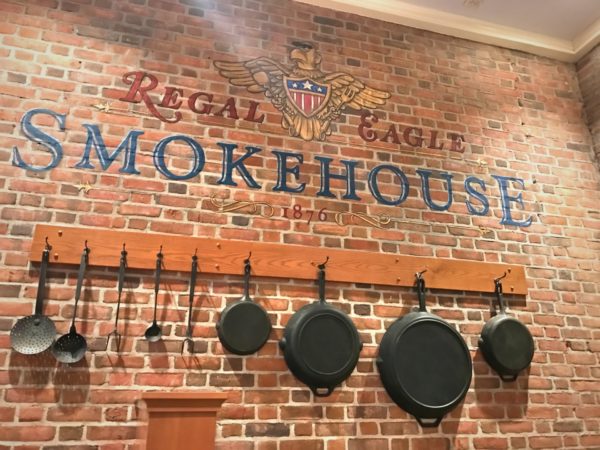 Disney’s newest BBQ restaurant is now open! Officially it is called the “Regal Eagle Smokehouse: Craft Drafts & Barbecue Restaurant”. We live in the day of Google and search engines, where keywords are everything.

Informally known as the “Regal Eagle,” this new quick-service eatery has great food, a patriotic atmosphere, and fun touches of Muppets and fans will enjoy.

When you are facing The American Adventure, you will see the restaurant on the left. It is in the location of the former Liberty Inn, which saw many menu changes over the years.

In front of the restaurant, you will find picnic table seating with blue umbrellas to offer some protection from the sun. You will also see a huge meat smoker. This will certainly draw people into the area for both the spectacle of the huge smoking machine as well as the wonderful smells it will create.

There are two bar bays that offer a variety of drinks. Non-alcoholic drinks include a Berry Sparkler and Frozen Iced Team Lemonade. Alcoholic cocktails include a Frozen Mint Julep, Tennessee Lemonade (made with Jack Daniel’s Whiskey), a Frozen Strawberry Daiquiri, and several beer selections.

Once inside, there are plenty of touches of Americana, including tributes to the early days of the United States as well as many Muppet references.

There is plenty of air-conditioned seating inside, including picnic tables and booths along the walls. As is traditional in southern barbeque establishments, each table has a roll of paper towels instead of napkins. Eating barbeque is messy business, so you have to be prepared!

I had a chance to try the biscuit and sausage, together with onion rings. The sandwiches were served up on Texas toast. I

‘m happy to report that everything was delicious! There were a number of sauces to try and enjoy, including flavors with mustard, vinegar, and smoke. You can try them all in small self-serve paper cups.

It wouldn’t be a Disney experience with merchandise.  You can get a limited selection of Regal Eagle shirts and kitchenware in the kiosk in front of The American Adventure.

Will you try the Regal Eagle BBQ restaurant in Epcot?