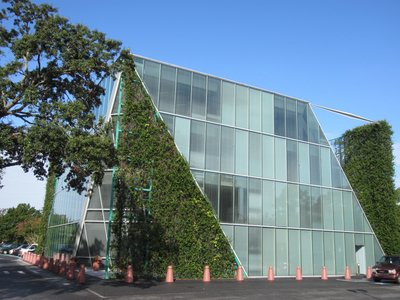 With the Florida Project, as Walt Disney World was originally known, Disney hoped to avoid the factors that had compromised the Disneyland experience.  After Disneyland’s opening, all kinds of businesses sprung up near the park, ruining the perfect design and environment Disney developed.

In order to avoid this problem, Disney hoped to achieve unprecedented control over the Florida property in order to ensure that Disney World was a complete realization of its vision for the resort and community.

But unlike the wild and unplanned development that sprung up around Disneyland, this time Disney had a plan to get the control it learned that it so desparately  it wanted.

The first step was secrecy so that Disney could purchase plenty of land at reasonable prices.  Disney purchased nearly 50 square miles of land in Central Florida using the names of dummy corporations. After the tremendous success of Disneyland, the company new that any hints of a major Disney development project in Florida would cause the vacation industry to flood the area – and would cause land prices to skyrocket. Only after it had acquired all the land it needed did the Walt Disney Company reveal its plans.

The primary reason Disney stated that it wanted control over its Florida property was the plan to build a Experimental Prototype Community of Tomorrow (which would eventually become not a city but the Epcot theme park). Walt originally envisioned this community as a futuristic city dedicated to incorporating the latest technological innovations into everyday life. Disney needed to create a functioning city where residents could live and work, but also retain permanent governmental control over the city in order to implement its vision.  Disney knew that working through the typical red tape of government agencies would make the project very expensive and nearly impossible.

After Walt’s death in 1966, plans for the Florida Project were spearheaded by his brother Roy O Disney.  By the way, Disney World probably wouldn’t have happened if it were not for Roy.  After Walt’s death, the company was in a state of shock and confusion.  Many inside the Disney Company thought it would not be possible to complete Disney World without Walt’s personal leadership, and they suggest that the company shut down the project.  It was Roy’s leadership that made the dream of Disney World a reality.

In order to drum up civic support for the Disney World plans, and to help gain the development control over the project that hte company wanted, Roy Disney screened a 24-minute film entitled Project Florida for government and business leaders, and members of the press.

At this large event, Disney first proposed the creation of the Reedy Creek Improvement District (RCID) as a governing body for the entire Florida property.  Under Florida State law, Improvement Districts have the right to construct nearly anything and issue tax free government bonds.

The Reedy Creek Improvement District is a government agency and therefore can’t technically be directly controlled by a corporation like Disney.  However, in this case, Disney’s control is indirect but nearly complete.  More on that in a moment.

The Florida Legislature agreed to Disney’s proposal to incorporate two cities – Lake Buena Vista and Bay Lake (both of which lay within the boundaries of the Disney property) – and also establish the Reedy Creek Improvement District.

Ultimately, the Reedy Creek Improvement District (RCID) granted Disney the ability to do everything from building roadways and utility systems to regulating building codes and managing public transit. Disney even gained the right to build a nuclear power reactor – in the unlikely event they should ever choose to do so.

The RCID comprehensive plan dictates that Walt Disney World be permanently surrounded by a wide green belt to keep out the sights and sounds of outside development. It also gave Disney nearly complete authority to develop and manage its enormous property without interference from many government agencies.

Ultimately, the amount of control that Disney retains over the Walt Disney World lands is unprecedented, and well-beyond the power granted to most municipal government bodies.

Although Disney never ended up building a city on the original Florida Project property, the RCID gave Disney the ability to ensure that its Sunshine State paradise that is permanently protected from the outside world.  And the streamlined development and building process gives Disney a unique business advantage.