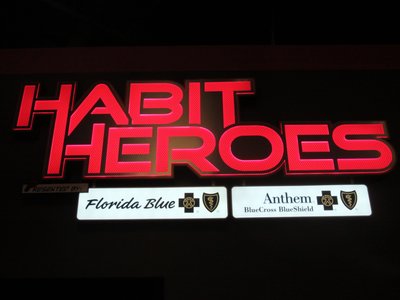 The message of living a healthy lifestyle is something that everyone needs to learn, and Disney has been reorganizing their company around that message. In recent years Disney has banned junk food ads from its kid’s shows and has added a new Mickey Check logo to healthy food in its theme parks.

These are generally perceived as positive moves, although it’s not hard to imagine that – at least in part – these changes are being driven by Disney’s lawyers who are looking to protect the company from a future avalanche of obesity lawsuits which could cost billions of dollars.

So when the Habit Heroes attraction, sponsored by Florida Blue and Anthem Blue Cross / Blue Shield, originally debuted for soft openings back in February of 2012 in an effort to teach healthy living skills, many were surprised that it created such a stir. But after looking at that old content, maybe it’s easier to understand why some people were up in arms.

Disney quickly closed the first version of the attraction, initially with no details on how it might rework the attraction, or if it would ever reopen. Now, after nearly a year, the attraction is open once again, but with a completely different look. In fact, the only thing this new edition of the exhibit shares with the old version is the name and location. Everything else from the original was dumped.

The idea behind the exhibit was to show that healthy living can make us feel like a super hero. For the new version of the attraction, Disney Imagineers gathered feedback from experts at Stanford University and Cornell University. Gone is the focus on childhood-obesity theme and in its place is a focus on healthy living in general.

In the new attraction, a Cast Member host leads your group of up to 12 guests through a 16 minute experience that explains how to deal with the enemies of poor nutrition, dehydration, and inactivity. Gone are the muscled super heroes and the original video that included an overweight child host.

Instead of representing enemies with fat cartoon characters, Disney now represents the enemies with symbols like animated flames that cause dehydration, rocks that weigh you down and drain your energy, and monsters that prevent you from making healthy food choices.

Three rooms use different technologies to tell the story, including motion-tracking technology and blasters.


The second room features blaster guns.
The third room uses cards that you hold up against stations around the room.

The Orlando Sentinel reports that Peggy Howell, a spokeswoman for National Association to Advance Fat Acceptance, appreciates Disney’s listening to their feedback for the second version of the attraction.

What do you think about the redesigned Habit Heroes?