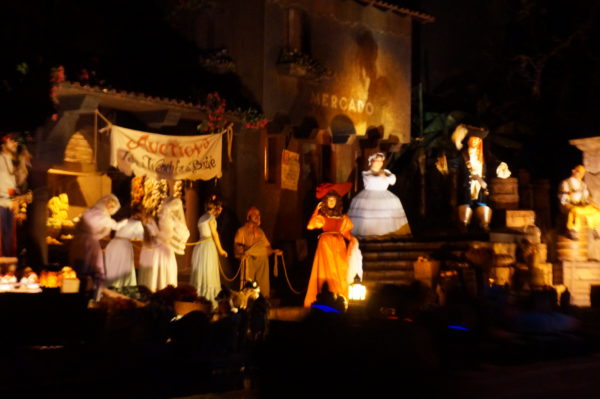 Pirates of the Caribbean - redhead

Recent Attraction Changes To Disney Attractions You May Have Forgotten

Retheming and overhauls are nothing new to Disney Parks. There have been many changes to attractions throughout the years, all of which with the intention of keeping up with times.

Although most of these changes are met with some sort of resistance, the changes are still implemented, and the attractions remain beloved by many.

The big-impact closure of attractions like The Great Movie Ride and Maelstrom are just some examples of the major changes to attractions in recent history.  Let’s take a look at some other changes that have happened in the not-too-distant past that you may have already forgotten:

Pirates of the Caribbean changes make waves across the internet when they occur.

The first was the implementation of characters from Walt Disney’s Pirates of the Caribbean films into the ride. Today, you will find several Jack Sparrows throughout the attraction.

Another change, and one that is still a hot topic issue, was the amendment of the “Auction Scene”, where a depiction of women being auctioned off to pirates included phrases like “We wants the redhead”. The scene was so popular that several merchandise pieces could be found in the shops up until its removal. In an attempt to be more inclusive, a new scene replaced the “Auction Scene”. Today, the scene depicts a female, red-haired pirate who appears to be in charge and the audio now stating, “We wants the rum”.

Like Mr. Toad’s Wild Ride, Snow White’s Scary Adventures has often been met with controversy on how appropriate the attraction is for children. Several original scenes of the attraction were said to have scared even the adult riders. At one point, you “ran” through a dark forest. The most controversial scene, though, was when the Evil Queen/Witch turns to riders and appears to change from one character to another. The animatronic and elements used were so scary that multiple refurbishments of the ride had to be implemented. Even after the “refurbs” the Magic Kingdom’s version of the attraction officially closed to make room for Princess Fairytale Hall.

If you climbed aboard one of the Safari vehicles today, you may not even recognize that the route you take, and who you run into, are different than those experienced on opening day in 1998.

When Animal Kingdom first opened, the premise of the park was conservation and animal appreciation, and for the most part, that underpinning still stands. In an effort to stress the severe impact of poachers on wildlife, scenes were added to Kilimanjaro Safaris to drive home the point.

One of the most notable differences between the opening day Kilimanjaro Safaris and the ride we know today, is the use of animatronic poachers. The scene depicted a camp that had kidnapped a baby elephant. These show scenes were removed, with one of the reasons being the contrast between real wildlife vs. Imagineered elements. The non-real aspects could take the rider’s attention away. It’s also believed Imagineers didn’t like the optics of having such animatronics on a modern-day attraction.

You can still see minor elements of these scenes in areas of the attractions and during the pre-show video.

The hub and spoke style ride is featured in a number of Disney Parks and is considered a staple. The US Parks have seen several changes to the attraction including additional vehicles, a change in colorways, and location changes.

One of the most notable changes though is the removal of Timothy Q. Mouse’s training whip on top of the attraction’s hub. The whip has since been changed to the movie’s magic feather to appeal to all ages.

Mission:Space appears on this list, although there haven’t been any major changes to the ride. There has, however, been an addition to the attraction that allows riders to take a slower pace trip.

Mission:Space, which still sits in EPCOT today, is a motion simulator in which the rider shares the same seats as an astronaut. The ride looks to mimic some of the feelings NASA astronauts experience while training and in space.

The problem is that riders are not astronauts and the ride was a bit intense for some. According to statistics, several people have sought medical attention after riding the attraction and a total of two people have died (both with pre-existing conditions). Mission:Space, now offers a green side, which has significantly less elements added during the attraction.

At one point in the not-so-distant past, Disney was trying to find a way to appeal to teenagers and adults by offering attractions geared towards thrill-seekers. One of the ideas that came out of this school of thought was Alien Encounter.

The show was simple, yet pretty scary to those who didn’t know what to expect or who may have been too young. The main idea was that guests would sit around a tank-like display. As luck would have it, something goes wrong and you experience a number of effects as you encounter the alien who has escaped. Some of the elements used a number of your senses to determine where in the darkroom the alien was. Bright lights, loud noises, and creepy sounds all were added to the show to scare the guests.

When Alien Encounter first opened, it turned out to be too scary for a large portion of guests and didn’t quite fit into Magic Kingdom as a whole. Imagineers reworked the show, and at one point turned it into Stitch’s Great Escape before its ultimate closure.

Yes, Disneyland also had a Country Bear Jamboree. The musical show was located in Critter Country but was closed in 2001 to make way for The Many Adventures of Winnie the Pooh.

If you walked past the Many Adventures of Winnie the Pooh at Disney World’s Magic Kingdom, you may have never known that it was a fairly new attraction (opened in 1999).

Before the Hundred Acre Woods was built, the spot was home to another English favorite, Mr. Toad. Comparing the two ride tracks, you would see that Mr. Toad’s Wild Ride and the Many Adventures of Winnie the Pooh are almost identical. But there is a huge difference in the theming of the attractions.

Mr. Toad’s Wild Ride, while still active at Disneyland, has always been an attraction that draws some controversy. At one point in the attraction, riders visit Hell, where they are thrown into the “Jaws of Hell” with several scary scenes and characters present. Also featured are words written in flame-like font.

Like a number of overhauls or closures, Disney gave one of the reasons for the closure as a need to make room (in this case for new Fantasy Land), but it has been long speculated that the scary scenes made it an easy cut for Imagineers.

The Only Constant Is Change

As you can see from this list, changes have been a part of Disney Parks for decades. Although the reasons for each change may be different, the idea behind the changes has always been to appeal to a larger crowd and ensure a more inclusive Park experience for everyone.

What extinct or reworked Disney attraction do you miss most?