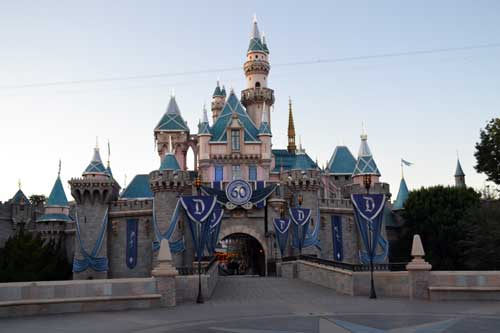 If you’ve read my articles before you already know that I’m a Walt Disney World fanatic. I’m a former cast member, owner of a business that specializes in Disney travel destinations, and literally half of my house is covered in Walt Disney World memorabilia.

What you may not know, however, is that Disneyland is my absolute favorite place on the entire planet. After my wife and I first made the trek out there on our honeymoon in 2008, I was completely and totally hooked. Then, when Disney’s California Adventure’s renovation was complete and I had the opportunity to fly out to the West Coast and see all of the changes, I couldn’t believe my eyes!

Here are my Top 5 Reasons WDW Fans Need To Go To Disneyland.

5. To Walk Where Walt Walked

Disneyland Park is the only park that company founder Walt Disney ever set foot in, and there are still traces of him all over that park!

Disneyland fans are always commenting that you can really feel Walt Disney’s presence when in the park and honestly that could not be more true. From the light from Walt’s lamp being constantly on in his old apartment over the Disneyland Firehouse to the walkway through Sleeping Beauty Castle to the patio over at the River Belle Terrace where Walt used to eat breakfast, this is still very much his park.

If you want to feel like you’re walking back in time, not to the turn of the century but to 1955 when the park first opened, just sit on a bench on Main Street USA and people watch for a while. The sights and sounds of that part of the park will instantly take you back to the days when Walt Disney was walking up and down the street, interacting with guests and thanking them for coming.

If you’re a fan of the food in Walt Disney World, then you won’t believe what is in store for you out at the Disneyland Resort. I’m going to rattle off a few items that you can get out in Anaheim that you can’t get in Central Florida.

Ready? Okay, here we go: the famous Monte Cristo sandwich from the Blue Bayou Restaurant or Cafe Orleans, the Matterhorn Macaroon, the Banyan Beef Skewer from the Bengal Barbecue (spicy but fantastic!), Duck Wings at the Carthay Circle restaurant in Disney’s California Adventure, the Chili Cone Carne from Cozy Cone Cafe, the World-Famous Disneyland Corn Dog from the Little Red Wagon in Disneyland (technically available now at Disney Springs, but you need to go to the original location!), and last but not least, the Plaza Inn’s incredible Fried Chicken!

The food at Disneyland is a whole different experience in itself and it’s one of the major reasons Disneyland’s annual pass holders are so incredibly passionate about “their park.”

When Walt Disney World’s Magic Kingdom opened in 1971, many of Disneyland’s classic attractions opened with it, including Snow White’s Scary Adventures, Mr. Toad’s Wild ride, It’s A Small World, & Peter Pan’s Flight. In 2016, you can no longer ride Snow White or Mr. Toad in WDW, but they still live on in all their scary glory in Disneyland!

My favorite attraction in Disneyland, however, is the Indiana Jones Adventure, Temple of the Forbidden Eye. While it’s ride system and track are identical to Animal Kingdom’s Dinosaur attraction, the experience is completely different and worth the cost of a Disneyland ticket any day!

The Disney company realized that the original incarnation of Disney’s California Adventure was a bit of a miss. With the somewhat recent overhaul of almost the entire park, Disney has transformed California Adventure to a must-see, world class theme park more than worthy of the Disney name!

The park is fantastic. From the awesome, early 1920’s version of Hollywood on Buena Vista Street to the most immersive land Disney’s Imagineers have ever created, Cars Land, this is a park I could spend day after day in and never get tired of.

The attractions are fantastic and beautiful (Radiator Springs Racers being the best of the bunch), the theming is top-notch, and the food and drink selections are extremely unique and really take the park to that next level. The park really comes to life at night, though, and when the sun goes down, land after land are lit up in ways that any Walt Disney World fan is sure to love!

1 – To See The Nighttime Shows

My absolute favorite part of my last two trips out to Disneyland were the nighttime spectaculars that the parks put on almost every single night! I don’t know which one I like best between California Adventure’s World of Color & Disneyland’s Fantasmic (different from WDW’s version), Paint the Night parade, and the Disneyland Forever fireworks display.

If there was only one tip I was allowed to give for Walt Disney World veterans who are going out to see Disneyland for the first time, it would definitely be to not miss any of these amazing experiences! You will leave singing, dancing, and maybe even crying a little bit (not me, I’m a man…okay, I may have gotten a little choked up during World of Color!)

If you’re like me and you’re constantly counting down to your next big Walt Disney World vacation, I honestly think you should give some serious thought to heading out to Disneyland as well. It’s a completely unique, different experience and one that you will never forget.

Oh, and I forgot to mention, did you know that if you stay on Disneyland property EVERYTHING is within walking distance?! You can literally go between the two parks (with park hopper tickets of course) in minutes, maybe even seconds!

Next time you’re planning a Disney trip, you might want to make your first stop the Disneyland website with your second stop being eartotheretravel.com!

Do you think Disney World fans should visit Disneyland?