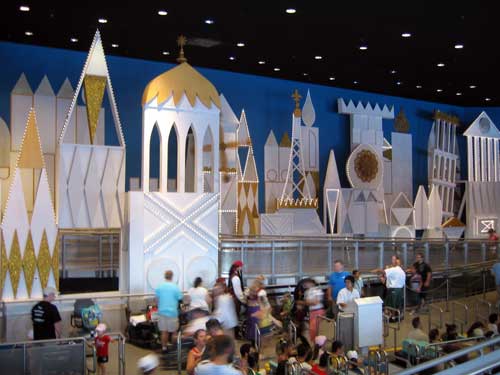 Have you ever been on a Disney World attraction when it stopped?

I can be a little unsettling, especially if your doom buggy makes an unscheduled stop in the Haunted Mansion.

If you think back to a Disney World visit, you’ve probably experienced something like this, too.

You also know that attractions – mostly boat rides and omnimover rides – stop pretty often. Guests often get a little concerned when this happens, but I assure you, there’s nothing to worry about!

Usually, when ride vehicles stop in Disney World, it’s not a mechanical issue but the Cast Members doing their job and stopping or slowing the ride manually. Rather than panicking, you should, instead, be thankful that the Cast Member is so well trained and can keep you completely safe!

Here are the top five reasons that attractions stop in Disney World.

This happens most often on omnimover attractions. The conveyer belt moves at a consistent speed, but not all guests load and unload at the same pace. Sometimes elderly guests move more slowly, and other times families have a hard time choosing a seat.

If a guest exits the ride vehicle before the ride is over, the ride will stop immediately for the safety of everyone. This happens often on slow-moving rides, and I have seen people mistakenly step off the boat on Living with the Land once because they mistakenly thought the ride was over.  The result?  The attraction stopped.

This is never safe – rides often involve moving water and electricity. You should always stay in the vehicle until the Cast Member tells you it’s safe to exit. It is even more dangerous on fast-moving rides like Space Mountain, but Cast Members say guests try to exit early more often than you would think.

3. A guest dropped something heavy

As I already mentioned, a ride will stop automatically if someone exits the ride before it’s over; however, the ride’s computer can’t tell the difference between a person and something else heavy. If a guest drops a purse or a backpack out of the ride vehicle, the ride will stop, and a Cast Member can assess the situation then restart the ride.

4. Boats are backed up

There are several boat rides in Disney World, and the boats often get backed up. It happens frequently on It’s a Small World and Pirates of the Caribbean, and it never fails to happen when I’m under the waterfall on Splash Mountain!

Boats usually back up because the unloading process is slower than the loading process. Fortunately, Cast Members are well trained and can handle the situation with very little impact on the other guest’s ride experience.

Disney World is very good at accommodating guests, and they go above and beyond what is required by the Americans with Disabilities Act. This is something Disney should be very proud of, and guests who don’t require accommodations should respect the guests who do; this will make Disney a magical place for everyone!

Some attractions require guests to transfer from their wheelchair. Transferring may take more time especially if the person requires help. Other attractions allow riders to stay in their chair, and this will not take as long.

Have you ever gotten stuck on a Disney World ride when it stopped?