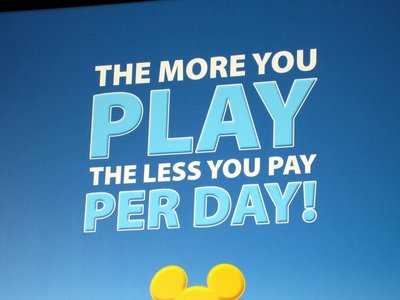 Four Reasons Why Variable Pricing Could Be Coming To Disney World

More and more, we are living in a world where different people pay different prices for the same products and services.

The most common example is with airline tickets. Depending on how far in advance you purchase your ticket, when you leave and arrive, and whether your are staying over a weekend, a trip from one location to another could cost just a few hundred dollars for some folks but thousands of dollars for another.

Here are four reasons why variable pricing could be coming to Disney World tickets:

You might think that Disney World doesn’t use any variable pricing now, but they do.

One form of Disney variable pricing is so common it is not even noticed any more. It is for Disney resort hotels. A Garden Wing – Standard View room at Disney’s Contemporary Resort for Christmas Eve costs a whopping $530 per night, but the very same room in the middle of February costs $425.

And Disney’s current use of variable pricing isn’t limited to just their hotels. Hard ticket parties, like Mickey’s Not So Scary Halloween Party and Mickey’s Very Merry Christmas Party, have different prices depending on whether you purchase tickets in advance or at the gate, and whether you are attending well in advance of the holiday or right before it. A ticket to the Christmas party in late November costs $58.95, while a ticket to that very same party in late December costs $67.95.

And Disney’s pricing already varies the price-per-day for park admission, where purchasing a single day tickets has a much higher cost-per-day than purchasing a multi-day ticket.

Universal Orlando already charges different rates for standard tickets vs. those with the Universal Express Pass, which allows you to skip the standby lines. At Universal, if you are willing to pay an extra $19.99 per day on top of the admission prices, you no longer have to wait in line with the huddled masses.

In the past, it was very difficult to administer prices that changed. Now, with advances in technology and more web-based purchases, it is much more possible.

In addition, Disney is investing literally billions of dollars in their new NexGen projects which include FastPass Plus, which will allow Disney Resort guests to reserve ride times well in advance – before they even leave for their vacation. It seems like all this new technology puts the infrastructure in place that would allow Disney to offer innovative new variable pricing options, if they chose to do so.

From an economic perspective, not only could Disney potentially make lots more money with variable prices for theme park tickets, but they could also even out crowds and potentially provide for better guest experiences. By charging higher prices for prime-time visits, they could provide an incentive for people to choose to visit at other times with lower prices – evening out demand and providing lower wait times for everyone.

While all these are logical reasons on why Disney could implement variable prices for admission tickets, it does not mean that they will. Making changes like this can be very tricky.

A few years ago, Martin Lewison, who was the chief executive officer of the Coca-Cola Company, talked about the idea of installing vending machines that had thermometers and would charge people more for a Coke on hot days, and less on colder days (Source). The public reaction was swift and harsh. Pepsi accused Coke of gouging, and Coke quickly said they weren’t going to implement the idea.

Even Apple, which is generally seen by customers as doing very little wrong, ran into problems with changing prices. They dropped the price of the iPhone by $200 just two months after it went on sale (Source). Understandably, all those folks who paid more were upset. Apple offered those disgruntled customers a store credit to help make up the difference.

Disney Will Be Careful

According to said Martin Lewison (Source), a college professor who studies theme park pricing, Disney will need to be careful in any changes they make. Because of the potential for strong guest reaction, he predicts that Disney isn’t likely to make any drastic changes to their pricing.

However, we have already seen some variable pricing in place, and it looks possible that we will see more in the future – even if the changes come slowly and in small steps.

What do you think about variable prices at Disney World?