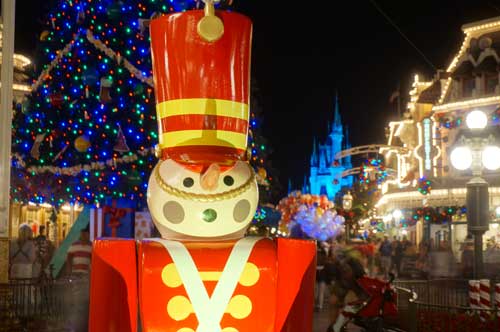 November is a unique time of year at Disney World.

Halloween is over and Christmas isn’t quite in full swing yet. Schools are still in session, and high school kids are taking mid-terms while college students are worried about finals.

This means that crowds are generally lower especially in early November, and rates will be less expensive than during the upcoming busy Christmas season.

There are also two holidays in November that allow you to make the most of your vacation days. Veteran’s Day is earlier in the month, and although it’s only a one-day holiday, you can use it to save one vacation day and decrease the number of days kids will be out of school. Thanksgiving will see larger crowds than the rest of the month, but you’ll still see smaller crowds than at Christmastime.

So, here are five reasons to visit Disney World in November!

If you have a sweet tooth, Main Street Confectionary is the place to be starting in November. Although it’s not the only place to find Christmas-themed treats, it will have the best selection. From candied and caramel apples to cookies and special cupcakes, you’ll be on a sugar high just walking in! There’s nothing wrong with beginning your Christmas snacking early. After all, calories don’t count in Disney World!

What’s more, there is a ton of exclusive merchandise including pins and apparel that isn’t available during the rest of the year. Once it’s sold out, it’s sold out, so get it while you can!

Although November is the tail end of the hurricane season, the weather is usually very nice. The first half of the month sees temperatures between 60 and 80, and the second half has lows in the 50s or 60s and highs in the 70s. Humidity is also lower this time of year meaning you can walk around comfortably. You’d be surprised at how much more you can accomplish in the cooler temps! You won’t be sweating, but it’s still warm enough to visit one of Disney’s two water parks or hang out by the resort pools, which are heated.

Disney begins decorating for Christmas right after all the Halloween decorations come down. Magic Kingdom is always first beginning with Cinderella Castle, which is draped with icicle lights. The Dapper Dans don their Christmas colors, and the Jingle Cruise begins, which is even more fun and kitschy than the already very cheesy Jungle Cruise. Hollywood Studios and Animal Kingdom are next, and Epcot gets ready for the Holidays Around the World Candlelight Processional, which begins in late November.

Beyond the parks, the Disney resort hotels really go all out for Christmas. Although some do more than others, the decorations are always well-themed with the resort. Giant Christmas trees are a staple, and you’ll see dozens of them all over property. Disney’s Grand Floridian Resort and Spa builds a giant gingerbread house in the lobby, which will also serve as a working store selling treats and snacks. Disney’s Boardwalk Resort also builds a working store called Ginger’s Bread and Cookie Shop. Disney’s Beach Club Resort assembles a giant carousel, and Disney’s Yacht Club Resort displays a Holiday Village complete with a miniature train.

Because of where November is situated in the year, there are several events going on simultaneously. If you visit very early in November, you may still be able to experience Mickey’s Not-So-Scary Halloween Party. The Epcot International Food & Wine Festival begins in the fall in late September and runs through mid-November. Mickey’s Very Merry Christmas Party is also very popular, and it runs from early November through December. Finally, in years past, the Osborne Family Spectacle of Dancing Lights has lit up Hollywood Studios from November to January. Although Disney announced that 2015 would be the last year for this display, fans are hoping it will be moved to another location or that Disney will have a change of heart and continue the tradition.

Finally, did you know that the Disney parade that airs on ABC on Christmas day is not live? It’s actually filmed a month or more before Christmas! If you visit in November, you might be able to be part of the taping. There are live performances by famous musicians and you’ll get to see some of Disney’s best floats. You might even get the opportunity to see yourself on TV, but you should know that taping takes a long time and there is lots of waiting.

If you time it just right, you could easily experience a few of Disney’s most popular events in one vacation!

Do you enjoy visiting Disney World in November?