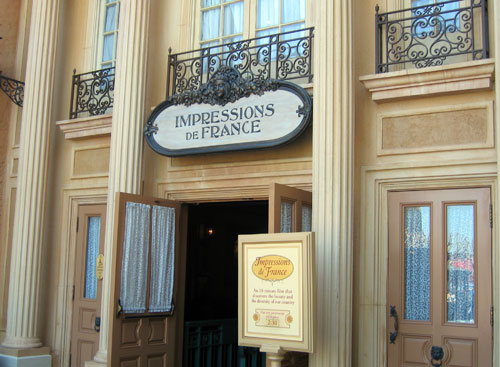 Five Reasons to Give Impressions de France Another Look

Many people argue, with some justification, that there are just too many attractions around Epcot that are simply movies. Yes, some of the movies are in 360 like those in Canada and China, and one combines with a special ride system that makes you feel like you are flying (yes, I’m referring to Soarin). These are still movies. Even the Universe Of Energy contains extended segments that are movies – although you get to see them from very cool moving theater vehicles.

Epcot is what it is.  Movies are and will be a significant part of the Epcot experience for some time to come.

One movie you may have never seen, or only seen once, is the one in the French pavilion called Impressions de France.

If that is the case, it’s a shame.

It’s a shame because Impressions de France is a very fine film.

Here are five reasons why you should give Impressions de France another look; maybe even a screening each time you visit Epcot:

France is a beautiful place with plenty of variety from the scenic beauty of wine harvest at the Monbazillac Vineyard to the gardens at the Palace of Versailles to the Notre Dame Cathedral in Paris. The cinematography of the Impressions de France film is as beautiful as the place it captures.

Buddy Baker is a Disney Legend who composed literally hundreds of tunes for Disney over the years. He arranged the music for the film based on many different pieces of classical French music from the likes of Maurice Ravel, Paul Dukas, and Claude Debussy. He also conducted the London Symphony Orchestra who performed the music. How cool is that?  The end result is stunning.

With the exception of Soarin and Test Track, which can regularly have stand by wait times of an hour or more, many of the attractions at Epcot typically have short wait times. The movie in France is one of those attractions. Rarely is there a wait at all for the movie, except waiting for the audience in the theater in front of you to clear out.

Disney projects the 18 minute movie onto five adjacent screens which provide a 220 degree coverage. Not quite the same as a 360, but close. It opened on October 1, 1982, the opening date of Epcot, and was upgraded to digital projectors in 2011. The color and clarity of the images is tremendous. You won’t see the all the specs of dust and hairs that sully the old analog projection in Soarin. (I’m still wondering why Disney doesn’t invest in few cans of compressed air to occasionally clean things up at Soarin, but that is a topic for a different day.)

So this might be a bit of a stretch, but with the opening of the Le Halles Boulangerie Patisserie bakery at the exit of Impression de France, you can now not only see and hear about the joys of France with the movie, but after the movie you can taste and smell the joys of French food – from tarts and éclairs to hot chocolate and ham sandwiches.

With all of these benefits, I suggest that you give Impressions de France a try next time you visit Epcot.