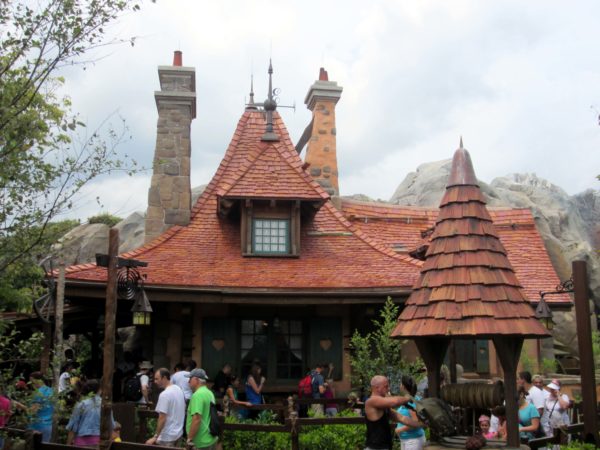 When you think of Disney, you probably think of either Disney World (or Disneyland if you’re on the west coast), but you may not have considered that there are many  locations around the world that inspired Walt and his predecessors to create amazing and realistic theme park environments and movie locations.

Let’s take a look at the top ten Disney destinations around the world.

Hotel de Glace in Quebec City, Quebec, Canada inspired Elsa’s Ice Castle in the recent box office hit, Frozen. Elsa may have made her ice castle with her magical powers, but this ice castle is constructed by hand in real life. It takes dozens of workers a month to create this impressive and unique structure.

It’s the only true ice hotel in North America, and it’s only open from January to March. The hotel made completely of ice formed over metal frames has 51 rooms, and the structure is different each year.

If you’re willing to brave the cold (with heated bathrooms) and you love Frozen, this is definitely a destination to see!

In Disney World, stop by Frozen Ever After in Norway to get your Frozen fix!

Neuschwanstein Castle is located in Bavaria, Germany. Walt loved this castle. After a visit with his wife, Lillian, he was inspired to model Sleeping Beauty’s castle after this one not only in the movie but also in his Disneyland park.

The castle was originally constructed by Ludwig II of Bavaria to be a reclusive place of refuge, but, even though he paid for it out of his own fortune, it opened to the public after his death in 1886.

Besides being a model for Sleeping Beauty Castle, it has also appeared in Chitty Chitty Bang Bang and The Great Escape. With an average of 1.3 million people visiting annually, this is a very popular destination!

You can’t see Sleeping Beauty Castle in Disney World, but if you head to Disneyland on the West Coast, be sure to check it out!

Mont Saint Michel may look familiar since it influenced the design of Prince Eric’s castle in The Little Mermaid.

Located in Normandy, France, it has been a fortress for many thousands of years. Its location is perfect for welcoming pilgrims and for defending its land. There are several historical monuments on the property that are protected by the French authorities.

You can almost picture Ariel sitting on the rocky beach reviving Eric!

Wait, is that a typo? No, it’s not. This fortress also appeared in form in Tangled. It was Rapunzel’s family home and where she was taken from. I guess it wasn’t a strong enough fortress to protect Rapunzel!

You get a double-dip with this spot!

You can find Rapunzel in Princess Fairytale Hall in Magic Kingdom.

Alsace, France is likely the motivation behind Belle’s “provincial town.” How do we know? During the failed wedding scene, a wine bottle has Alsace’s signature white stripe around the neck.

Alsace now exists as part of Grand Est. since it combined with two other regions by order of the French legislature. No matter. You can still visit and recognize the charming town as significantly influencing the design of Belle’s home.

Many people consider Belle to be French, but if she was from this town, despite the fact that it is located in France, the traditional language is more like German. However, most people speak French as well.

Beauty and the Beast is prominently featured in Magic Kingdom’s New Fantasyland in Be Our Guest restaurant, which is still one of the hardest Advanced Dining Reservations to get, and Enchanted Tales with Belle.

If you’re a Brave fan, and who doesn’t love Merida, you’ll recognize the Eilean Donan Castle as the inspiration for her family’s home, which has had four variations since the 13th century. It was destroyed by feuding clans and giant ships in 1719, and the present-day structures are a result of a Lieutenant-Colonel rebuilding the ruins 200 years later. A footbridge was raised simultaneously to connect the island with the mainland, but there are no residents of the castle or the island.

Eilean Donan is the third most visited castle in Scotland with over 300,000 visitors each year. This may seem like a small number, but the castle is often featured in photographs, films, and even on food and beverage packaging. Therefore, it is likely recognizable to many more people.

Merida meets and greets guests next to Cinderella Castle throughout the day!

Jasmine, princess of Agraba, lived in a palace that is a lot like the Taj Mahal, which is located in Agra, India, a place with a strikingly similar name.

The structure was insanely expensive at the time of completion around 1653 at a cost of approximately $827 million dollars by today’s standards. It’s no surprise that we often refer to something as being “the Taj Mahal” or saying “it’s no Taj Mahal.” However, did you know that the Taj Mahal was actually created as a tomb for the emperor’s favorite wife? The mausoleum is part of a massive 42-acre complex that includes a mosque, a guest house, and formal gardens.

Disney fans may indeed appreciate it as inspiring Jasmine’s palace in Aladdin, but it is officially a UNESCO World Heritage Site and recognized as a significant piece of Muslim art.

Jasmine appears for meet and greets in Adventureland in Magic Kingdom. Sometime Aladdin even joins her!

It’s no secret that The Hunchback of Notre Dame is set in Notre Dame, France, and specifically in the Gothic Cathedral of Notre dame de Paris.

This Catholic Church is considered the “Taj Mahal” of French Gothic architecture, and it’s one of the most recognizable buildings in the world. Besides this, visitors can also see some of the best stained glass and some important relics of the Christian religion like the Crown of Thorns, a piece of the Cross, and one of the Holy Nails.

If you’re looking for a location a little closer to home, Grand Central Terminal in New York City is a great place to go. It was part of Wreck-it Ralph as the Game Central Station.

In the real world, Grand Central serves as a hub for high-speed transit. It is located at the famed 42nd Street and Park Avenue. At 48 acres and 44 platforms, it covers more ground than any other railroad station in the world. The Main Concourse, which is pictured in the movie, is one of the most visited tourist attractions in the world too.

Although it’s not available yet, rumor has it that a Wreck it Ralph attraction will be taking over Stitch’s Great Escape in Magic Kingdom’s Tomorrowland!

The Louisiana bayou is beautiful in real life with swampy lakes and slow moving rivers. It is a defining characteristic of the state, but it’s also home to scary creatures like alligators and catfish.

The Princess and the Frog is set in New Orleans and takes on many traditions of the area including voodoo and Cajun influences. It isn’t hard to see the Louisiana inspirations in this movie!

For a bayou experience in Disney World, book a stay at Disney’s Port Orleans resort! There are even Princess and the Frog themed rooms!

Does Disney do a good job of getting inspiration from the real world?