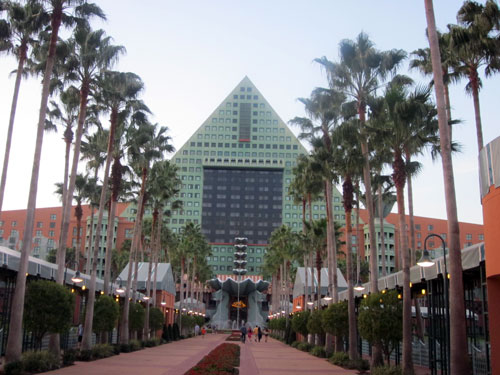 Epcot is one of my favorite Disney World parks. There’s a ton of variety with thrill rides like Test Track and Soarin‘ in Future World, authentic cuisine in World Showcase, and fantastic entertainment at each of the country pavilions.

There are also three annual festivals: The International Food and Wine Festival, the Flower and Garden Festival, and the International Festival of the Arts. All the festivals are fun and provide additional entertainment and dining options as well as special merchandise.

If you’re planning a trip during either one of these festivals, then Epcot will probably be your focus. As such, you’ll want to choose a resort that provides easy access to the park.

While the Dolphin Hotel provides accommodations comparable to the Disney World Deluxe Resorts, it is not a Disney-owned resort. That and the fact that it is the farthest from the parks makes it number five on our list

The Dolphin Hotel is styled in modern architecture with some flares of the Renaissance. There are two (goldfish-like) dolphins sitting atop the building. With recent and planned renovations, the rooms and public areas of the resort are getting a facelift.  The guest rooms are the smallest on our list at 360 square feet.

The Dolphin Hotel has a nice pool called the Grotto Pool with a waterfall and a hidden cave behind it. There is also a water slide, an area for the kids, and a hot tub for the adults. Views at the Dolphin can vary, but the best views are those facing the Grotto Pool or the Boardwalk Inn.

As I mentioned, the Dolphin is the farthest of our five hotels from the parks, but it still isn’t a bad walk if the sun isn’t blazing. I should remind you that, since Disney doesn’t own the Dolphin, guests staying at the Dolphin can’t use the Magical Express.

All of that said, at less than $300 per night, this is one of the lowest priced hotels on the list. However, since it is independently owned, you should watch for additional fees like the $25 resort fee and the $18 per day for self-parking.

The Swan Hotel is the Dolphin’s sister hotel so they share many of the same characteristics including theme, rooms, pool, cost, and views.

For the best views at the Swan, request an east-facing room on the upper level with a balcony. Though you’ll pay a little for the upgrade, you’ll be happy you did with views of the canal, the Boardwalk, and Epcot.

The Swan makes number four on our list because it is a little closer to Epcot than the Dolphin sitting just across Crescent Lake. It’s further from Epcot and Disney’s Hollywood Studios then the Disney-owned hotels, but the cost per night just might make up for that.

Disney’s Beach Club Resort is one of the most expensive deluxe resorts on property, but you get what you pay for.

The hotel is elaborately themed in New England-style with serene colors and beach décor.

Guests have access to the amazing Stormalong Bay, which is like a waterpark in and of itself with a lazy river, a whirlpool, two water slides, and the only sand bottom pool in all of Disney World.

Standard view rooms face Epcot, and these rooms are very close. However, some rooms near the main building are quite a walk especially if it’s very hot as it tends to be in Florida. It’s also a long walk to Hollywood Studios.

Rooms start around $670 per night and can go as high as $2400 for villas, but this is a really great resort for families.

Disney’s Yacht Club Resort is a bit more formal than its sister resort, the Beach Club. The nautical theme is carried from the main building and into the rooms, which feature marble tile in the bathrooms. At 381 square feet, there’s a good bit of space to move around.

The Yacht Club also uses Stormalong Bay, which is a reason enough alone to visit this hotel. With such an elaborate water park at the resort, maybe you can save some money on water park tickets to help with the extra per night cost here.

Disney’s Yacht Club is further from Epcot and Hollywood Studios than The Beach Club, and there’s no shortcut through the Boardwalk, but it’s still a nice walk. There are also Disney busses.

Disney’s Boardwalk Inn, themed like a turn-of-the-century Atlantic Boardwalk, ranks number one on our list mostly for its location. It’s the easiest walk to both Epcot and Hollywood Studios, and many Standard View rooms allow for Illuminations viewing from your balcony.

The rooms are new and luxurious. At 371 square feet, they’re a bit smaller than the Yacht and Beach Club rooms but larger than the Swan and Dolphin rooms. The rooms here are in very close proximity to Disney’s Boardwalk with shopping, entertainment, and dining options.

The only downfall at this resort is the pool. There’s a nice waterslide that looks like an old wooden rollercoaster, but the creepy clown at the bottom can really scare some impressionable kids- and adults!

With rooms as low as $350 per night, this is Disney’s least expensive deluxe resort hotel, but it provides the best access to the parks! You really can’t beat Disney’s Boardwalk Inn if your main focus is Epcot especially during festival season.

Which Epcot area hotel is your favorite?