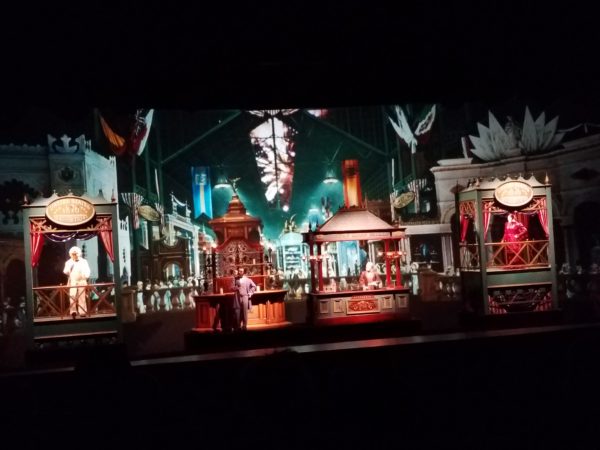 No doubt, Epcot’s World Showcase is one of my favorite Disney destinations. I love feeling like I’ve traveled in the world in just 1.1 miles. Each country pavilion is beautifully themed like its country, has amazing regional food and transports you half way across the world. But let’s admit, it’s A LOT of walking, especially if it’s a tropical Florida day or there’s a downpour. On those days, when you need a bit of a respite, several of the countries offer nice indoor movies showcasing their homelands.

On my last trip to Disney, since I was without kids who get bored at these kinds of things, I decided to watch all five of the offered films and rate them from worst to best (I always like finishing on a positive note).

Ooh la la, I love the France Pavilion! What’s not to love? There’s quaint little buildings, delicious pastries and ice creams, fine dining and wonderful thematic details everywhere so when I heard they had a film, I truly expected it to be spectacular. Spoiler alert: I was pretty disappointed.

Situated in the back of the pavilion between some cute little shoppes is the theater for this show. The 18-minute show runs practically continuously through the day, so head back anytime and the Cast Members will let you know when the next one starts. The movie screen is set up in several panels that create a 200-degree surround screen as you choose a place to sit. I knew going into each of my shows, that I struggle with motion sickness in some movies, so I chose a nice seat in the back and boy, am I glad I did.

The movie will transport you to France, both the countryside and the big city. The wide-angle moving images are really tough to bear if you have any struggles with motion sickness. And while the images are beautiful, unfortunately, the movie is old, so the colors have faded and even the different connecting screens sometimes project the colors unevenly. Combine that with footage that comes from several decades ago (gotta love the wide ties and feathered hair!), and this particular movie just wasn’t worth the headache it produced for me.

I really enjoy walking into the back of the Canada pavilion and had visited it several times without even realizing that tucked away behind the rocks and waterfall is a little theater showing O’ Canada, a tribute to all the glory of our northern neighbor.

If you’re looking to rest your feet, this is not the place to go. This theater is a standing only Circle-Vision 360 degree room. You walk into the round theater, find a place to stand among the railings and prepare to be wowed by all that is Canada, and entertained by one the best things to come out of Canada, Martin Short. If you like Martin Short, I think you’ll like this show but if you don’t, well, you probably won’t live to regret missing it.

This movie is also a bit dated and with each panel having about a foot of wall between it, you really don’t get the full affect of being completely surrounded by the movie, which in the case of motion-sick me, that’s actually a plus. My easily disorientate brain was able to distinguish between the stationery me and the moving pictures so I rarely got dizzy.

Step inside the beautiful Temple of Heaven in the China Pavilion to watch another Circle-Vision 360* movie. Before you enter, a gracious host will explain some of the history of China and the movie and even teach you a few key words in Chinese. I really liked this personal touch before heading into the theater. Once again, this is not a theater to rest your feet, because you will stand in the middle again and the movie will take place all around you. But, like the others, it does have air conditioning and sometimes that can be enough respite!

Unlike Canada’s funny and somewhat kitschy movie, this one is very serene with glorious photography and poetic descriptions of the country. It also has a nice mix of one large image covering all the screens to individual videos on each screen. And while these screens are closer together, for some reason, I found myself the least motion sick in this theater of all the three already listed. It was relaxing and beautiful and I only needed to look at the floor once to re-orientate my center of balance.

I will admit my top two “shows” are so far ahead of the others, it’s hard to even compare them. But they are like the other three in that, they rarely have lines, many people don’t know about them, and they provide a nice break from walking around the world.

This one is a two-fer! It’s a ride and a movie! Head inside the Mayan pyramid and walk to the very back. While there’s often a line to hop on one of the boats, it’s usually quick moving and completely worth the short wait. Once you’re in the boat, you’ll float through many of Mexico’s beautiful cities and countrysides as you and your friends, Panchito and Jose try to find Donald Duck! He’s having so much fun in Mexico, he keeps forgetting he has friends looking for him!

You won’t learn a lot about Mexico on this boat ride, but you’re guaranteed to have fun and be pleasantly entertained!

I’m embarrassed to say, I went to Disney a half dozen times before I even knew this was a show. I think it’s because when I read the huge sign that says, “The American Adventure,” I thought it was advertising the actual pavilion. Anyway, learn from my mistake, and don’t miss this! It was recently updated and it’s a home run!

Enter the theater by going inside the huge “people’s mansion” on the America Pavilion. You’ll be lead upstairs, riding up escalators that travel under multiple American flags from different times in history. From there you enter a HUGE 1000+ seat theater where this 30-minute show will unfold before you.

Narrated by Audio-Animatronics of Mark Twain and Benjamin Franklin, you will see America’s history performed before you with 35 Audio-Animatronics figures, rear-projection film footage and patriotic songs. (There’s no shame in shedding a tear or two during this performance.) This show took Disney Imagineers 5 years to complete and was just recently updated to include some of America’s newest heroes and icons, so I highly recommend it. It’s a glorious break and as a side note, if you get the chance, make sure to catch the incredible singers performing in Voice of Liberty, also inside the building.

What’s your favorite show to watch in World Showcase?