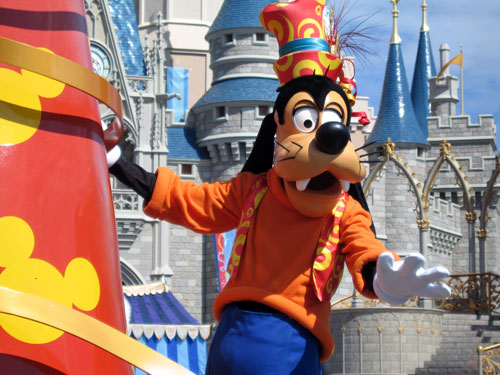 A Disney vacation is quite magical, but have you ever thought of trying to make it more magical?

We all love being on the receiving end of random acts of kindness from Disney Cast Members. Perhaps we were selected for a room upgrade, VIP fireworks viewing, or a special dessert at dinner.

What if I told you that Cast Members aren’t the only ones who can grant these random acts of kindness?

Here are several ideas, separated into two categories, of things that you (yes, you!) can do in Disney to make someone’s Disney day better.

Guests often ignore the fact that Cast Members are people even though they’re on the job and are there to serve you. They work hard, often under difficult conditions. Why not show them how much you appreciate their hard work?

Mousekeepers (Disney’s housekeeping) are probably the most overlooked Cast Members. We hardly ever see them, but we enjoy our fresh linens, emptied garbage, and cleaned bathrooms. Sure, you can (and should) leave them a monetary tip, but why not give it a little more thought? You can leave them a note thanking them for doing such a great job, or perhaps you could leave them a snack. Make sure the snack is sealed, and make the tip – whatever form it’s in – is obvious. They won’t take something if it’s just sitting on the table or nightstand.

Characters are another group of Cast Members that people take for granted.  Characters love to receive pictures or notes written by kids!

Cast Members working at attractions or restaurants work hard to make your vacation everything you’ve dreamt of and more. Showing them your appreciation can make them feel really great. Talk to them. Ask them how their day is going and listen to their answer. Look at their name badge to see where they’re from. Do you have a common location? Can you ask them about their hometown?

Tokens of appreciation are also a great idea. Handmade ornaments, sealed snacks, and thank you notes mean a lot to these Cast Members who are oftentimes working through school. If a Cast Member makes an impression by doing something really great, it would be kind of you to fill out an official Cast Member Fanatic card with their name, location, date, and approximate time. You can do so at Guest Relations at the front of the park or online if you’ve already returned home. The Cast Member’s leader will then officially recognize them in the next staff meeting.  These compliments can go a long way in helping a Cast Member get a promotion!

Cast Members dedicate their days to making our days even more magical, but guests can do random acts of kindness for other guests too.

Consider buying someone in line behind you a Mickey ice cream or a popcorn or letting a family with young children ahead of you in line. You may have the patience to wait another couple minutes for your ice cream, but the five-year-old and his dad may not! If you want to buy the treat for someone, you can even use your Disney Dining Plan credits. If you have an extra snack credit you know you won’t use, you can use it for someone else, and it’s a virtually free random act of kindness! Someone who was ending their vacation once purchased a meal for me with their dining credits that were going unused.  I really appreciated that!

You can also leave quarters and a penny in the pressed penny machine so the next visitor gets a free souvenir!

Another great idea is to purchase a stuffed animal and leave it in a random stroller with a note about the animal needing a new home. This is a great way to pass it on anonymously.

You can also leave things behind. If you purchased a case of bottled water that you didn’t finish, consider posting on social media what you have, what resort you’re staying at, and when you’re leaving. Certainly, someone will snag your sealed leftovers! Once you make a connection, just leave it at baggage claim under their name.

Snacks and drinks aren’t the only thing you can regift though! One souvenir that folks traveling by air can’t take home is a balloon.  Instead of popping it or releasing it into the air, consider gifting it to another guest before you leave! Your child may be sad to leave it behind, but they’ll feel great and learn an excellent lesson by passing it on. What’s more, if you have a gift card with a remaining balance, this is also a good thing to pass on since it can only be used in a Disney park or at a Disney store.

Other random acts of kindness don’t cost a thing but are greatly appreciated! Compliment a parent for a child’s good behavior, another guest for their creative Disney outfit, or just say something nice to another guest. It’s much better than mowing down guests with your stroller to get to where you want to go!

When you’re nice, other people are more likely to return the gesture. Speaking of which, giving up your seat on a bus, ferry, or monorail car to an older person or a parent with kids is a good way to show kindness. Bonus points if the parent is holding a sleeping child at the end of a long day in the parks.

Finally, offering to take a picture is a simple and much-appreciated random act of kindness. Not everyone has the Memory Maker, and maybe there isn’t a PhotoPass Photographer where they want a picture. If you see someone trying to squeeze everyone in the picture while taking a selfie, offer to take the picture for them.  I’ve done this many times.

Have you given or received a random act of kindness at Disney World?