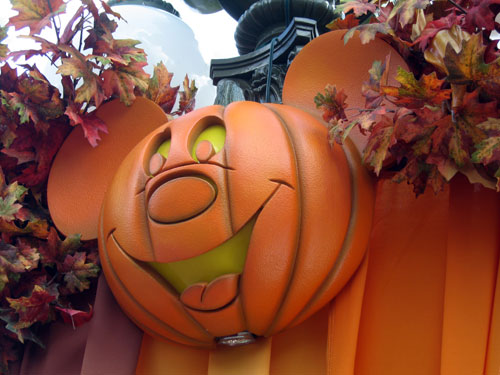 While Halloween might seem like it is still far into the future, you might want to start thinking now about whether you are going to take in Mickey’s Not So Scary Halloween Party. Let’s look at some key questions and answers about this event.

1 – Question: What is Mickey’s Not So Scary Halloween Party?

Mickey’s Not So Scary Halloween Party is a hard-ticketed event that takes places on select nights in September and October in the Magic Kingdom. “Hard-ticket” means you need to purchase a separate ticket to attend the event. When you enter the party, Disney gives you a wrist band. After the party starts, Cast Members look for folks who have entered the park during the day and direct them to the exits.

2 – Question: Is there trick-or-treating?

Yes! Many parents appreciate the sense of safety offered by knowing their kids will get candy directly from Disney instead of from strangers. Disney provides plenty of different tick-or-treating stations. In the past they have even offered a few healthier alternatives to the typical candy choices. While kids will love access to candy, remember that there are plenty of special events available during the party, so you might want to make a plan about how much time you will spend on each of the different types of activities: trick-or-treating vs. special party entertainment vs. characters vs. attractions.

Yes! If you attend the party, you will see many people wearing costumes. Wearing a costume can be a fun part of the event. However, keep in mind that the weather in Florida during September and October is often hot and humid. Wear something light. Also, Disney requires that costumes not be obstructive or offensive.

4 – Question: When does the party start?

Usually the party starts at 7pm, but you can actually enter the part as early as 4pm. Do yourself a favor and show up as close to 4pm as you can so that you can enjoy some rides and, potentially, get in line for some of the more popular activities.

5 – Question: What characters can I see?

The Halloween Party provides some of the best opportunities to see Disney characters, especially some that are not often seen inside the parks. Let’s take a look at some that you will likely see at the party:

Jack Skellington and Sally from the Nightmare Before Christmas typically greet guests in Town Square. The wait is often 2 hours and rarely lets up. Be prepared to spend some time in line if you are a Nightmare fan.

The Seven Dwarfs, usually together with Snow White, are also extremely popular. The line to get your picture taken with these seven dudes is typically long throughout the entire party, so again be prepared to wait.

Others – You can see other characters in both Frontierland and Adventureland. They usually show up at dance parties where you can sneak in a photo with relatively little wait time.

6 – Question: Can I get a special Sorcerers of the Magic Kingdom Card?

For all those fans of the Sorcerers of the Magic Kingdom interactive game, Disney typically distributes a game card that is exclusive to the party. The line to get this card can be quite long so if you want to minimize your wait, consider picking it up as late as possible in the evening.

7- Question: Should I ride the Haunted Mansion?

What is a Halloween party without a trip into the Haunted Mansion? You may actually want to skip it. The ride inside the Haunted Mansion will be exactly the same as it is all year long, except that you will wait longer for it than you normally would. Unless your heart is set on this ride, save yourself some time and ride it another time. However, Disney does a great job of lighting the outside building with special effects, so you may want to swing by just to check that out and take some photos.

8 – Question: What special entertainment is available?

There is a lot of entertainment at the party, but there are three primary ‘big ticket’ shows:

Boo To You Parade

Disney puts on this extremely popular parade twice a night. The parade starts in Frontierland and follows the typical parade route. The Headless Horseman rides through before the parade; many people consider this to be a “must see” event. Since Main Street USA has special lighting, many people like to view the parade there. If possible, catch the second presentation of the parade. It will be less crowded.

Disney puts on this fireworks show just once. It include additional fireworks around the perimeter of the park, so some of the best viewing locations are on Main Street near Casey’s Corner and the Plaza Ice Cream shop.

This fun show includes plenty of villains you don’t often get to see in a show presented on the Castle stage. It’s fun and worth checking out.

9 – Question: Do I need to get my tickets in advance?

This is a question without a single, easy answer. Let’s look at the pros and cons of the party:

Pros: Usually the crowds are smaller than they might otherwise be so you can often see and do a lot during the party. You also get lots of extras, including special entertainment, decorations, lights, and music that is specific just to the party. The party has an especially fun atmosphere too.

Cons: You will pay upwards of $50-$75 per person for a party that lasts about 6 hours. That’s a bit expensive.

Overall I think it is worth doing the party at least once. You can then decide if it is worthwhile make plans to check it out again.

Do you like Mickey’s Not So Scary Halloween Party?