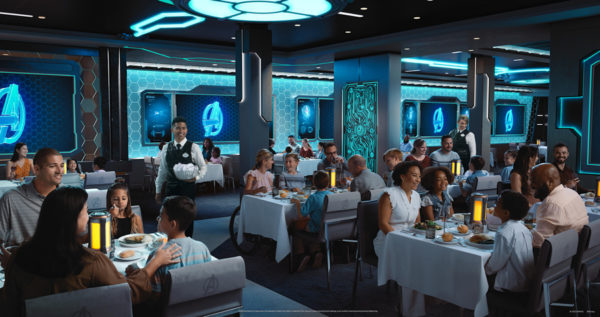 Disney has announced more details about the “Avengers: Quantum Encounter,” a new, interactive dining experience aboard the Disney Wish – the latest ship in the Disney Cruise Line family.

The dinner show will follow Ant-Man and The Wasp as they present a special presentation of Super Hero technologies, including Iron Man’s arc reactor, Captain America’s shield, and Ant-Man’s Pym Particles.  It will include holographic models and iconic scenes from the Marvel Cinematic Universe on screens around the dining room.

The big event will be a hands-on demonstration of the latest and greatest Pym Tech, the Quantum Core.  It will show cutting-edge (read: highly unstable) technology to shrink and grow targets.  This is a Disney show, so you can expect that something might go wrong – including a villain’s unexpected appearance.

The dinner will offer food inspired by legendary locales like African Wakanda, Eastern European Sokovia, and the Avengers’ New York City.   Disney will release the menus at a later time.

Excited to dine in the Quantum Encounter on the Disney Wish?