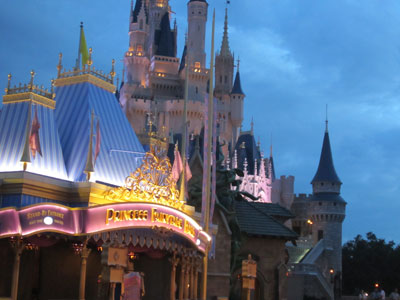 A long time ago (well, back in May, 2012), in a land far, far away (well, in the Magic Kingdom), there was a classic Disney dark ride: Snow White’s Scary Adventures. It was one of the opening day attractions that visitors enjoyed on October 1, 1971.  The Snow White attraction was a fan favorite (especially for one boy who rode it 3,500 times, but that is a story for another day).

But nothing can stop progress or princesses.

This is the latest addition to the New Fantasyland, and is perhaps the last major piece of the Fantasyland overhaul, except for the Seven Dwarfs Mine Train ride.

One other princess, like Snow White or Aurora from Sleeping Beauty, will visit each of the permanent princesses. It’s like you get one guaranteed princess (either Cinderella or Rapunzel) and one bonus princesses on each visit.

The new home is fit for a princess and has a wonderfully regal feeling. Unique lighting including detailed chandeliers, stained glass, plenty of stone-work, and impressive portraits decorate the waiting area. Portraits include Aurora, Mulan, and Tiana.

Just before you visit the princesses you can check out Cinderella’s glass slipper, and boy does it shine! I’m not sure if is radioactive or just uses some other magic trick, but it is truly dazzling.

Cinderella and her visiting princess are in one room, and Rapunzel and her friend are in another.

Their rooms include fairytale paintings and a table filled with books that include the original title of the fairytale in its original language. The book for Snow White is open as a tribute to Snow White’s Scary Attraction that formerly occupied this space.

Some fans were upset when Disney closed the classic, opening-day attraction of Snow White’s Scary Adventures. They argued that Disney removed a ride, and replaced it with a meet-and-greet, which wasn’t a great trade.

But you can’t argue with the business logic of princesses.

As mentioned above, in their former temporary home on Main Street, the princesses normally had longer wait times than Mickey Mouse. Princesses are popular, wildly popular. The Disney Princess line brings in $4 billion a year in merchandise and $2 billion a year in movie ticket sales.

Should Disney have replaced Snow White’s Scary Adventures with Princesses?