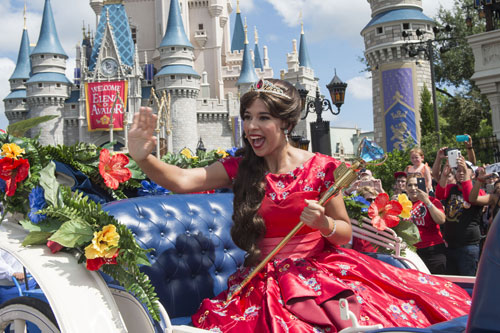 Walt Disney World is full of Princesses. From Walt Disney’s original princess, Snow White, to the more recent princess sisters, Anna and Elsa from Frozen, Disney can really pack in the royalty.

Princess Elena is Disney’s first Latina princess. If you think about it, you’ll realize that the majority of Disney Princesses are young, white females. Until relatively recently, Disney didn’t step too far out of this very limited demographic.

It started in the 1990s with Jasmine as a Middle Eastern Princess from the fictional town of Agrabah. She was followed two years later by Pocahontas, a Native American Chief’s daughter dealing with the white man trying to take over. Mulan, Asian; Tiana, African American; and Merida, Irish; all came in succession.

Now, Elena joins the squad. On the television show, she is voiced by Aimee Carrero who was born in the Dominican Republic to a Puerto Rican father and a Dominican mother. I imagine that Elena would have a similar backstory. Because of this descent, she serves as a role model not only for this generation but will go down in history as a girl who broke boundaries.

2. Inspired by Sofia the First

Elena is inspired by the hit Disney Junior series, Sofia the First. While some people say that Sofia is the first Latina Disney Princess, a Disney spokesperson clarified that all Disney Junior characters are from fantasy lands with fantasy heritages that may or may not reference real-life areas.

When the producer, Craig Gerber, heard the rumor of Sofia’s heritage, he realized that there is a real desire to fill the ethnic void in Disney Channel shows. Thus, he decided to create Elena and identify her as Latina.

Elena of Avalor has some special powers, but according to Carrero, these powers have consequences. Elena’s Scepter of Light comes in handy during her adventures. It’s a bit of a multitasker since it can serve as a weapon, an accessory, or even an x-ray machine to look behind doors. This magic has limits though since every time she uses it, it weakens her body.

I like that Disney is showing a more realistic side. Sure, you can be a princess, but not every princess is perfect. There are always consequences to actions, and there are always downsides even for royalty.

Disney’s Merida from Brave was the first princess who didn’t focus on needing a male counterpart. While other princesses showed some independence, they always had a prince come to the rescue.

Elena will continue this trend. Carrero says that her character is her own hero. She believes Elena and other girls have to find themselves before they can be in a relationship. This is yet another real-life reference that Disney is working into a fantasy storyline.

Since Elena is only 16 years old, her independent, single status fits the bill. It also reflects societal changes. When Walt was creating the first Disney princesses, girls were getting married at very young ages. In modern society, there is less pressure to marry young or even marry at all. So, while Elena is the same age as Aurora from Sleeping Beauty, Ariel from the Little Mermaid, and Mulan from the self-titled movie, she is more of a modern-day girl.

5. Elena of Avalor will greet guests in Disney World

If this all sounds like the profile of a Disney Princess you’d like to meet, you’re in luck!

Cinderella formally welcomed Elena to Magic Kingdom back in August with the first showing of Princess Elena’s Royal Welcome. This show will run through Fall 2016 until Elena takes up permanent residence next to Cinderella in Princess Fairytale Hall on November 24th. FastPasses for the meet and greet became available on October 14th.

Are you excited to meet Princess Elena of Avalor at the Magic Kingdom?