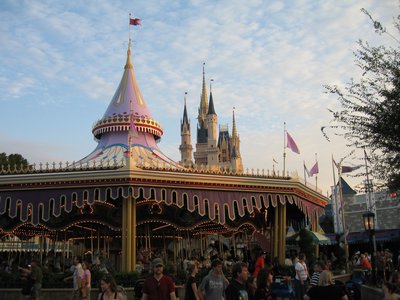 And that is apparent in The Price Charming Regal Carrousel.  The carrousel was formerly known as Cinderella’s Golden Carrousel.  Disney changed the name in June 2010 in anticipation for the changes that will come with the New Fantasyland expansion.  In fact Disney even came up with a story to explain the name change:  After Cinderella and Price Charming married and moved into the castle, the Price wanted to practice his jousting skills.  He built a small circular stand with life-sized wooden horses that allowed him to practice hooking rings with his jousting lance.  Later, so that all the citizens of the kingdom could enjoy the contraption, he built a beautify carrousel that now bears his name.

The Real History Of The Beautiful Carrousel

Disney legend says that Walt Disney himself wanted to include a carrousel in his theme parks after enjoying the one in Griffith Park in Los Angeles with his daughters.

The carrousel that now stands behind Cinderella Castle was built by Italian woodcarvers in 1917 by the Philadelphia Toboggan Company.  The Philadelphia Toboggan Company is the oldest roller coaster manufacturing company in the world and is still in business today.  The company celebrated its 100th anniversary in 2004 and built 87 different carrousels, of which 35 are still in operation.

The carrousel originally operated at the Olympic Park amusement park in New Jersey.  That park, which originally opened in 1887, closed down in 1965 – just a few short years before the opening of the Magic Kingdom on 1971.

Disney artists restored and changed the 90 horses of the original carrousel so that each horse was unique.  They artists also added hand painted scenes around the canopy that tell the story of Cinderella.

The Great Controversy About One Carrousel Horse

There is plenty of controversy about one horse in the carrousel.  Is Cinderella’s actual horse there?  Some say that it is a white horse in the second row with a gold ribbon at the bottom of the tail and a very wide red bridle on its face.  Others say that a princess would never have a horse in the second row, and that a horse for a princess would have much more decoration.  Adding to the controversy is the fact that Disney has released sculptures and lithographs showing Cinderella riding a white horse with gold bow on its tail, but Cinderella was never seen on a horse during the film.

The ride lasts for two minutes, during which guests enjoy hearing many famous Disney tunes including “Heigh Ho” and “Feed the Birds.”  Interestingly, the carrousel has 2,325 lights and 18 hand painted scenes telling the story of Cinderella.

Like with some many attractions at The Walt Disney World Resort, the little extras and the stories behind the scenes make everything just a bit more magical.

Prince Charming Carrousel is just behind Cinderella Castle, and inside Cinderella Castle is a special dining location and experience – Cinderella’s Royal Table.  The dining room is made with wonderful details and craftsmanship – leaded glass windows and grand medieval banners fit for kings and queens, princes and princesses.

As you enter the dining room you have an opportunity to have your photo taken with Cinderella.  Included in the price of the dinner for each group of four guests is a photo holder that includes several prints that you can take home to remember your special experience.

Breakfast (called “Once Upon A Time”) is an all you can eat meal with terrific food choices including everything from pastries to bacon and eggs, from special breads to yogurt.  Lunch (called a “Fairytale”) begins with an appetizer, main dish selecting including chicken, fish, and past, and a desert.  Dinner (called “Dreams Come True”) is a grand affair fit for a king with a prix fixe menu options like prime rib, salmon, pasta, and lavender chicken.

As you enjoy your meal the Disney princesses such as Cinderella, Belle, Snow White, Jasmine, Sleeping Beauty, Ariel, and Tiana will visit the tables, talk with guests, and even sign autographs or pose for photos.

Plan Ahead With A Reservation

Disney experts highly recommend that you make dining reservations for Cinderella’s Royal Table well in advance of your visit to the Magic Kingdom.  This character dining experience is very popular and is often fully booked.  Disney accepts reservations up to 180 days in advance – and you should plan to call as far in advance as possible within that 180 days window.  In fact, you will probably want to call at 7am ET exactly 180 days before you plan to eat at the restaurant.  Call 407-WDW-DINE (407-939-3463) and know that you might need to wait on hold for a while. You can also make your dining reservation online at Disney’s web site.

A Suite Place To Stay – Right Inside Cinderella Castle

Have you ever dreamed of living in a castle – or at least dreamed of staying in one for a night?  During Disney World’s now finished “Year Of A Million Dreams” promotion randomly selected guests were able to do just that – spend a night in the very exclusive and very luxurious Cinderella Castle Suite.

The unique suite, built inside Cinderella Castle, was inspired by French design, just like the kind Cinderella herself might have seen in the 1700s when her famous Disney story takes place.  Wood paneled walls, a fireplace, mosaics designed by artists, and stained glass all add to the special elegance.  As you look out the windows you can see Liberty Square and Fantasyland.

After the “Year Of A Million Dreams” promotion ended, there hasn’t been official word on how Disney is using the ultra-exclusive Castle Suite.  You can’t rent the room for a night.  Many suspect that The Walt Disney Company now uses the suite to wine and dine VIPs and artists.  Perhaps someday in the future there will be more opportunities to win a chance to stay inside Cinderella Castle for the night.

The Cinderella Castle suite may just be
the most exclusive hotel room in the world.

The Prince Charming Carrousel, Cinderella’s Royal Table Restaurant inside Cinderella Castle, and the Castle Suite are all amazing sights at Disney World that showcase the details and design that Disney does better than anyone else.