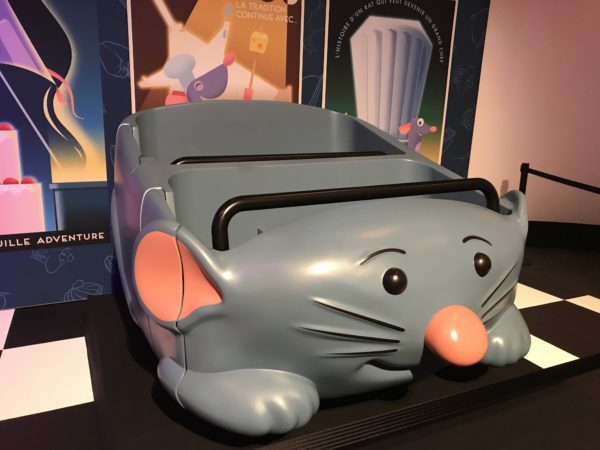 Breaking News: Ratatouille and Beauty and the Beast in the Epcot France Pavilion

Disney is holding a media event for the much-anticipated Rise of the Resistance grand opening in Star Wars: Galaxy’s Edge in Disney’s Hollywood Studios. Along with that, I had the opportunity to first preview two new attractions that are coming to the France Pavilion in Epcot’s World Showcase.

Let’s take a look at Remy’s Ratatouille Adventure and the Beauty and the Beast Sing-A-Long!

Remy’s Ratatouille Adventure is a significant addition to the entertainment options in the park.  Disney announced today that it will open in the Summer of 2020, but we don’t yet have an exact opening date.

Outside, the new building will blend with the skyline of the pavilion. Inside, it will be a replica of an attraction with a similar name in Walt Disney Studios Park in Paris.

Riders will be shrunk to the size of Remy, a rat who aspires to become a celebrated French chef. The problem is that he’s a rat, and rats generally aren’t welcome in kitchens. The ride will be an abbreviated retelling of the movie story with giant floor-to-ceiling screens and detailed ride-through sets. The 4D effects including water and heat from a very hot oven will delight the whole family!

There will even be a new restroom in the area to accommodate increased foot traffic in the area, as well as a crepes restaurant that serves both sweet and savory treats!

Beauty and the Beast Sing-A-Long

World Showcase is full of cultural nuances, and Disney likes to sprinkle in some characters as they within the culture of each pavilion. One of Disney’s most beloved stories is “a tale as old as time”- Beauty and the Beast.

The new Beauty and the Beast Sing-A-Long will debut on January 17, 2020.  This happens to be the same day that Disney will debut the new Canada film as well as the Awesome Planet film in The Land.

The Beauty and the Beast Sing-A-Long will bring five of the most popular songs from the story to life in a fun, interactive sing-a-long similar to the Frozen-themed sing-a-long in Disney’s Hollywood Studios.

The sing-a-long is directed by Don Hahn, who produced both the animated and live-action films.  It also includes new narration by Angela Lansbury.

The film offers a new twist on the classic film with an expanded backstory of LuFou, Gatson’s loveable sidekick.  The show includes brand new, hand-drawn animation made especially for the presentation.

Disney will keep the existing Impressions de France movie.  Both will be shown in the same theater.

Excited about Ratatouille and Beauty of the Beast in the Epcot France pavilion?