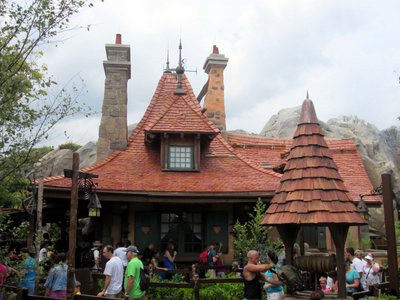 Preview Of Enchanted Tales With Belle In Fantasyland

This past Saturday I visited the Magic Kingdom and got an unexpected surprise. After exiting It’s A Small World, a Disney Cast Member asked if I was interested in previewing a new experience. I didn’t want to act like the nut I really am and bust with excitement, so I said “sure”.

He directed me to the blue construction wall around the new Fantasyland area, telling me to look for a specific Cast Member and tell him that Keith sent me over. It turns out that I was one of several hundred randomly invited visitors that got to experience the new Enchanted Tales With Belle attraction.

On The Other Side Of The Construction Fence

After being allowed to go behind the construction wall, I was greeted with a partial view of the new Fantasyland, which was not yet open to the general park-going crowds. I could see Belle’s house in the distance.

One of the first things I noticed was the number of trees and greenery. It has been said on other web sites, but it is definitely true – this new section of the park won’t feel like an endless expanse of concrete. It feels more like a the forest it is supposed to represent.

Approaching the house, I noticed great details – from the look of old wood to the copper down spouts. The detailing is terrific.

Upon entering the house, you feel the welcome rush of air conditioning and see what it would be like to visit Belle’s house – complete with a cozy fireplace and of course plenty of books around. There is where a Cast Member was counting guests, apparently to allow just the right number into the next room.

The next room is a workshop, with plenty of things to catch your eye. In the front of the room is a mirror. But it is no ordinary mirror. With some encouragement from the crowd, it becomes a magical portal and turns into the doorway. The whole group passes through the transformed doorway to the next stage in the adventure.


>
In the next room the Cast Member interacts with the Wardrobe and selects people to play parts into the little play that happens with Belle herself, a bit later. It seems that most any child who was willing to participate got a part.  And by having a part in the play I mean they received a cut-out to hold and a noise to make. Two adult males also get the role of the suits of armor.

Finally, we enter the nicely detailed library. This is where an animatronic Lumiere interacts with both the crowd and with Belle. Belle leads the play, including a march around the room. At the end, everyone who participated receives a bookmark from the Princess which reads “You’ll always be a part of my favorite story.” A Disney PhotoPass photographer was there taking pictures of the events, and handed anyone who had a part in the play a special Enchanted Tales With Belle PhotoPass card. With the card you can view and purchase all the photos taking during your adventure.

Overall I was extremely impressed with this new attraction. It seems like a great way to interact with a Disney character that is well beyond simply standing in line and then getting a hug and an autograph. Not only does everyone get to spend a few moments with Belle, but they get to participate in a little play.

I’m not sure if the experience will change before the official opening, but what is there right now is really great.

Enchanted Tales With Belle is scheduled to begin a preview phase on November 19 and officially open on December 6.